Sin City: the good, the bad, the ugly 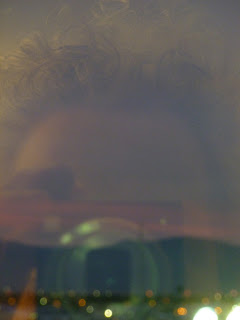 Las Vegas is a polarizing place; you either love it or hate it. I definitely did not love it.

Everything in Vegas, it seems, is fake. Fake volcanoes, fake Eiffel towers, fake Statues of Liberty. Even the grass is made of plastic. I did, however, get very excited when I spotted a stand of what I think were real trees...

I understand the whole mirage-in-the-desert concept upon which Las Vegas is built. I get that. I realize that there is a certain allure to playing make-believe with pretend glamour and reproductions of exotic locales that you may never get to in real life. I realize that a lot of people find escape in Vegas' excess, in its over-the-top tacky architecture and in those elusive pipe dreams of instant wealth that define the city.

But I didn't realize, before our trip there last week, just how pervasive that I will have fun even if it kills me mindset is. And I never really realized how ultimately sad and desperate that mindset is. Just ask all those people with oxygen tanks, smoking and feeding slot machines for hours on end, how glamorous their Las Vegas lifestyle is.

That said, rant done, there were some things that I really enjoyed in Vegas. Behold then, the Good, the Bad, and the Ugly list:

The Continental Cup of Curling
On site and a five minute walk from our hotel room to our arena seats, this was four great days of curling featuring the very best curlers in the world, ending with a right-down-to-the-wire photo finish. 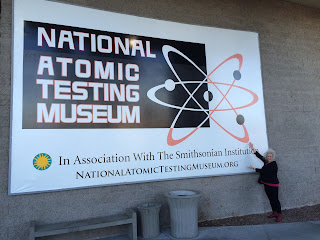 Fascinating display of the political, scientific and cultural history of the atomic arms race, including the astonishingly naive atomic testing that took place in the Nevada desert. Set up your lawn chair and watch the mushroom cloud!

Don't bother with the add-on Area 51 exhibition, though. It's pretty hokey and not terribly well done.

Casa di Amore
Billing itself as "Vegas the way it used to be" this old-timey neighbourhood Italian diner - far off the Strip - has wonderful food, throwback jazz singers providing dinner entertainment, and a cozy community feeling. More people kept arriving and they just kept bringing in more chairs. The highlight was when the band announced the 70th anniversary of a couple dining with their family. As the singer crooned a Sinatra tune just for them, the 90-year-old couple got up and danced together. We all clapped and got teary.

As if that's not enough, Casa di Amore will drive you home in a limo, for free. And they gave me a tee-shirt because I ordered the cannoli!

Cigarette Smoke
Smoking is allowed indoors in Las Vegas, at least in the casino areas. And there are very few indoor areas that are not casinos. It was disgusting and stinky and my eyes burned the entire time.

Gambling Overkill
I naively assumed that our hotel would have a normal hotel layout - front desk, lobby, some restaurants and services - and then have the obligatory casino in a room to the side. But no. The casino IS the hotel. You walk into the front door and are immediately assaulted by rows of slots machines all pinging away, lights flashing through the cigarette haze. Sure, there is no smoking in the restaurants, but they are all open to the casino, so it doesn't matter a tinker's damn. Anywhere you go in Vegas, you must pass through a casino to get there.

Plastic Carnival
I found the facade and the fakery, especially along The Strip, to be really disheartening and exhausting. It was like day six of the Calgary Stampede crammed into Disney World and stuffed into the Playboy Mansion. All the worst of society in one place.

The myriad of seriously unhealthy looking people, many with walkers and the odd oxygen tank, wheezing their way through the casinos.

Chain-smoking zombies endlessly feeding the machines, eyes fixed unblinkingly on the flashing colours, pausing only to order another drink.

Low rollers wandering from machine to machine, sucking on a beer, at 8:00 AM.

The layer of sadness and desperation that seems to have settled over the fragile veneer of merry-making. 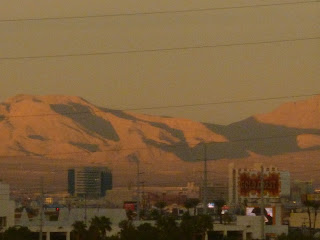 I wouldn't mind seeing some other areas of Nevada. I would love to see some desert tortoises, those atomic test sites, and some of the sandstone buttresses that have been shaped by wind and time.

But I will bypass Las Vegas.
Posted by Barbara Bruederlin at 7:57 pm

Agreed. I was there for a conference in July and stayed at The Flamingo on the strip. One added depressing things was that it was 110F/43C degrees outside and the AC was pumping so hard out of the hotels that you got goosebumps walking by doorways on the sidewalk. So much energy being used. Also, I went on a Lake Mead boat ride, which being from the Land of 10.000 Lakes was depressing because the lake was down 70 Feet. So low. Makes you thirsty. I had a second work trip to Duluth, MN after that Vegas trip and I was in Vegas dreaming of Duluth.

Egad. You make it sound dystopian.

We're stopping there briefly this summer. It was never on my places to see list but the Grand Canyon is and Vegas is our hub. Taking the kids to a Cirque show and a magic show then hightailing it out of there.

I couldn't agree more with your take on the milieu, Barbara. Overall, a ghastly limbo.

I've driven across Nevada and I visited Vegas once. That's pretty much all I need to do there. I've heard there are some trout streams, but there are better ones elsewhere.

In Vegas, dreaming of Duluth... That feels so right to me, Missy, being a lake girl myself. The bright spot on our Vegas trip was that everybody complimented me so much on my Missy-made curling toque. I am sure your ears were burning the entire weekend.

That sounds like a sensible plan, John. I am sure the grandeur of the Grand Canyon will be worth the pain of The Strip.

I love a good sciency museum, Erik, and this one was exceptional. Highly recommended!

I feel much the same, Eugene. There are so many other places I would rather visit. Even the 2018 Continental Cup of Curling will not draw me back there.

What a great summary! I've never been to Lost Wages, but most likely will end up there eventually, since many companies associated with my work have conventions there.

The closest I've come to that lifestyle is when I play solitaire on my Android phone in order to relax. I am bombarded by offers to download "slots" games. I study these things to get a sense of what the game involves, and it's pointless. It's all flashing lights, ringing bells, spinning wheels and digital confetti showering down at intervals. But obviously, the "winnings" aren't real -- at best, you get "tokens" that you can exchange for, not money, not even a gift card, but a CHANCE at a SWEEPSTAKES with worse odds than the state lottery! At least with the state lottery, the ticket is in your hand and it's real. I imagine Vegas is a lot like this. Lots of distractions and misdirection. Anyone who can ignore that and concentrate on what they're actually DOING at the machines or tables soon finds that the security cameras are keeping an eye on them, preparatory to escorting them off the premises, a la "Rainman."

There's so much more REAL stuff to see in the world, and it takes most of us far more than one lifetime. So why do people invest so much time in fakery???

So perfectly said, Vol-E! Distractions and misdirection are indeed the foundations upon which Las Vegas seems to be built. It's simultaneously frightening and very sad.
If you do find yourself being sent there for work, I hope you have a chance to discover some non-casino, non-Strip gems.