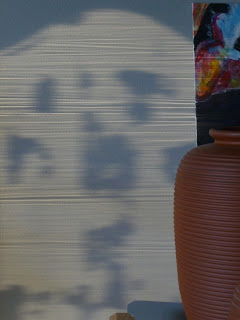 Autumn is very fleeting around these parts. It's why I have been taking the long way around the block (and maybe around the next block, too, while I am at it) to the newly installed community mailbox. Because I have a feeling that those after-dinner strolls to pick up the mail will lose their charm once the luster of the new experience wears off, sometime around February. Quite possibly considerably sooner.

But even more fleeting are those moments of absolute perfection that happen all too infrequently. You know those moments - the ones that make you stop, or at least slow your step - and tell yourself always remember this precise moment because life does not get any more beautiful than this very moment.

Many of the leaves are down now, but those trees that turn bright yellow seem to hang onto their leaves longer than most, and the evening was simply glowing in the late-day sun. As I rounded the corner on my take-the-long-way-to-the-mailbox post-dinner stroll, I spotted a new Little Free Library in front of the house up the road. Naturally I stopped to read the spines and, as luck would have it, spotted a book that I had been meaning to read for years.

I tucked the book under my arm - grinning like I had just gotten away with shoplifting - and continued around the curve in the road. And that was where I was struck dumb by the moment. To my left was a green space, treed with those yellow-leafed trees that always look as though the sun is shining directly out of them. They had been transformed into brilliant orbs of light. I took a few more steps and, through a parting in the trees, had a perfect view of the river valley of Fish Creek Park across the road and beyond that the Rockies - the clearest I have ever seen them at that spot - silhouetted in purple against the evening sky. Directly ahead of me, the setting sun dumped a bucket of fluorescent yellow paint on the stand of trees through which it shone.

It is a brief moment in time that I will add to my list of always remembers that I will pull out of my hippocampus as required and smile at having lived it.
Posted by Barbara Bruederlin at 6:58 pm 2 comments:

Email ThisBlogThis!Share to TwitterShare to FacebookShare to Pinterest
Labels: falling for fall, Little Free Libraries, remind me about this as I walk to the mailbox in January 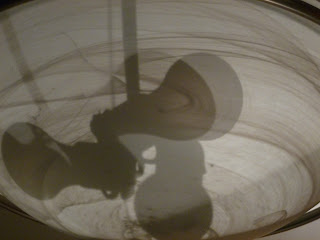 Because my writing is primarily done to deadline, the time of day is not so much a factor. Lately, however, the place where I write has become important.

I recently finished purging and reorganizing my office, turning it from a cramped and overflowing room that tried to be both an office and a spare bedroom - and succeeded at being neither - into a semi-minimalist office that works. There is now a sensible place for everything and everything is in its place. At least for now.

But sometimes, the words just will not gel. Even worse, they will morph into corporate-speak. And then I have no choice but to pack up the laptop and move to the dining room.

You gotta shake things up sometimes to keep them from getting stale.

Where do you write? Does it make a difference?
Posted by Barbara Bruederlin at 1:26 pm 6 comments: 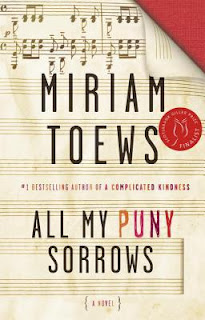 All My Puny Sorrows - Miriam Toews

It's been noted by people far wiser and more eloquent than me that Miriam Toews is hilarious even when dealing with the bleakest of subjects. Her latest novel, All My Puny Sorrows, certainly does deal with the bleakest of subjects - one sister who wants desperately to die, one sister who desperately wants her to live. So allow me to jump on the bandwagon here and state that All My Puny Sorrows is absolutely hilarious while being completely heartbreaking.

Yolandi is a bit of a mess. She tends to sleep around without really meaning to, has two kids by different fathers and scrabbles out a living by writing a Young Adult series called Rodeo Rhonda. She is now writing a "real" book,though, about a boat, that she schleps around in a Safeway bag. Yoli has returned to Winnipeg from Toronto because her brilliant, beautiful, talented concert pianist sister, Elfrieda, has tried to kill herself. Again. And now Elfrieda is begging Yolandi to help her to die.

Slightly screwed-up Yoli is enormously likable. (If Miriam Toews can't make it to my fantasy dinner party, then I hope that Yoli can come in her place.) She brings the funny to circumstances that should be anything but. Her self-effacing humour, even as she struggles to stay afloat, to keep various family members happy, and to keep her sister from killing herself, rings strangely true in a heartbreakingly tough situation. Because, of course, Toews drew from her own life to write this novel.

Toews wrote All My Puny Sorrows in the aftermath of her own sister's suicide. Like Yolandi, Toews grew up in the darkness of family depression, having lost her both her father and sister to suicide.

She has said that as a child, she took it upon herself to be the humourous distraction in the family dynamic, the lightness in all that darkness. That deep understanding of the essential role of laughter within tragedy has resulted in unforgettable people in a remarkable book.

Highly recommended.
Posted by Barbara Bruederlin at 9:49 pm No comments:

Email ThisBlogThis!Share to TwitterShare to FacebookShare to Pinterest
Labels: All My Puny Sorrows, book review, Can lit, literary characters I want at my dinner table, Miriam Toews 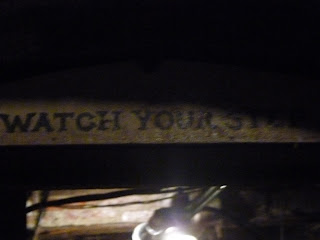 Eventually, they could no longer lift their heads. Over the years, their neck muscles had atrophied to the point where their chins were permanently fused to their chests. Their field of vision had narrowed to a small sphere around their feet and, of course, their thumbs clicking rapidly on the tiny screens clutched to their torsos.

They developed an instinct, eventually, to avoid obstacles as they walked. But in the early years, before the instinct kicked in fully - back when some of them could still lift their heads slightly - there were countless collisions along sidewalks and in hallways. Sorry - they would text one another after bumping shoulders or striding into each other head-on - didn’t see you.

The majority of them had by this time lost the ability to vocalize. They had become so proficient at communicating through keystrokes that speaking out loud seemed unnecessary, inefficient and boorishly outdated. Eventually the practice died out entirely, with only a few archaic holdouts uttering the odd LOL or WTF as they narrowly avoided yet another collision in the mall.

None of them had looked directly at the sky in years. A few had tried, arching themselves backward or draping themselves, head down, off chairs, but in the end it wasn’t worth the effort. At best, they caught a glimpse of the clouds before the strain of fiercely rolling their eyes upward caused them to quit. At worst, they dropped their devices in the process and then suffered excruciating panic attacks while they groped madly, blindly, for them.

Some of the older ones could remember a time when the devices were a mere convenience, an easy way to tell your partner that you would be late for dinner, to find out where your pals were meeting for a drink, to recall the name of that song by that band that you used to love.

Gradually, imperceptibly, there was a shift from convenience to lifeline. Over time, the devices became de facto memory banks. It seemed pointless, really, to memorize all that information, all those facts and figures and tedious numbers, when all the universe’s knowledge was right there, easily retrievable, at your fingertips.

Eventually, amongst the bowed heads, collective hippocampi withered away. Once the seat of human memory, cerebral cortices ultimately became nothing more than shrivelled appendages of the central nervous system. These once defining organs of humanity were now vestigial and slightly perplexing bits of tissue.

No new memories were ever made thereafter or stored within the human body. All knowledge was relegated directly to the devices. It was just easier that way. Heads began to bow, increasingly, permanently, endlessly, to the power contained within one small stylish box.

But not a single fact was ever unknowable, and they considered it a fair trade-off.
Posted by Barbara Bruederlin at 6:35 pm 5 comments: