what a wonderful world 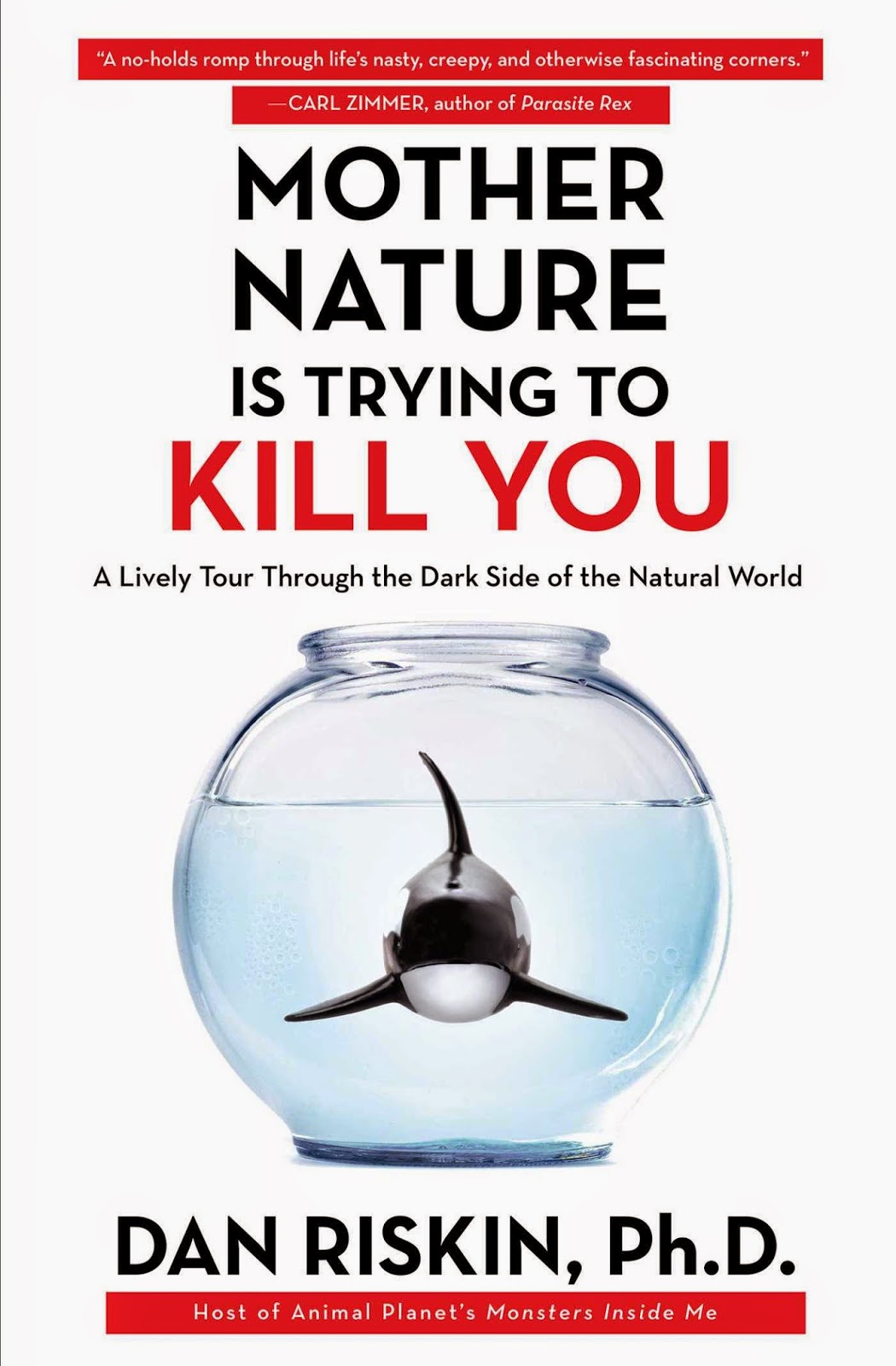 Mother Nature is Trying to Kill You
- Dan Riskin

We are all meat robots, nothing but transfer systems for our DNA, whose only goal is to replicate itself. That drives the actions of all living creatures and it can result in some utterly ruthless behaviour. Humans, despite our opposable thumbs and self-awareness, are not above this drive.

That, in a nutshell, is the premise of Dan Riskin's book. It's a rollicking good read, especially if you are fascinated (like I am) by all the wonderfully gory and ruthless methods that creatures use to stay alive and stay ahead of the competition.

Riskin - the co-host of Daily Planet (my favourite televised science show) - is an evolutionary biologist who grew up in Edmonton and who is bat-shit crazy about bats. He did his doctorate research on the mechanics of bat locomotion. Essentially, a man after my own heart.

In Mother Nature is Trying to Kill You, Riskin mines much of his own life for examples of the ways in which ... well, mother nature is trying to kill you. He begins the book with the cheery little tale of the time he came home from a bat-studying expedition in Belize with a botfly maggot lodged in his head. For two weeks, the maggot (which his friends named Georgia) provided Riskin with a neat little party trick with which to amaze and gross-out his friends before he finally had it removed. Riskin uses this tale to demonstrate the cool life-cycle of the botfly and the complex strategy (using mosquitoes as carrier systems) that it uses to propagate itself.

And that's merely the introduction. The body of the book is divided into chapters named for the Seven Deadly Sins, chock-full of examples of ways in which nature is greedy, lustful, slothful, envious .. well, you get it. Riskin provides fascinating examples of the ingenious and often deadly ways in which living creatures commit these sins in order to make sure that their own DNA is passed on to the next generation. Riskin, being a meat robot for DNA just like every other creature, even questions his own motives behind the love he feels for his young son. Is this fraternal emotion merely a technique utilized by his DNA to ensure that Sam (the recipient of Riskin's DNA) survives to propagate and pass that DNA to the next generation?

Not afraid to court controversy, Riskin occasionally editorializes, using his innate sensibility and scientific understanding to take the piss (sometimes gently, sometimes less so) out of delusional zealots, like the man who claims to have subsisted on nothing but sunlight since 1940 or the waitress with whom he used to work who would only take drugs that "came from nature". His thoughts on GMO crops were so sensible that I wanted to hug this well-spoken and thoughtful meat robot.

Meat robot or not, Dan Riskin has written a highly readable and fascinating treatise. From cannibal spiders to gang-raping ducks to fire-ants to parasites in all their clever guises, Mother Nature is Trying to Kill You gleefully covers all the good stuff.
Posted by Barbara Bruederlin at 9:24 am

I highly recommend it, Erik. It is deliciously squirm-inducing.