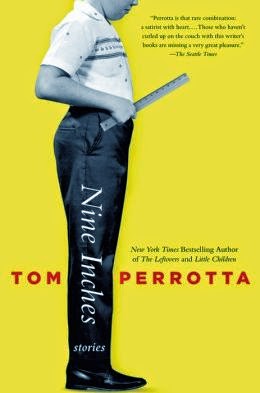 Prior to receiving this book of short stories in a care package from a dear friend, I had never heard of Tom Perrotta. I have since learned that he is an acclaimed novelist and Academy Award nominated screenplay writer. But for today's purposes, all you really need to know is that Tom Perrotta writes damned satisfying short stories.

Perrotta masterfully gets inside the heads of the characters that populate Nine Inches. Not all of these characters are particularly likeable (although many are), but they are all understandable. From the teacher who turns an online slagging on its head, to the little league baseball coach relying on a final win to keep his life from fully unravelling, to the weary volunteer who makes an unlikely alliance, these are all people who would not be out of place in your own neighbourhood. They can be unspeakably cruel, they can harbour secret hatreds, they can lead lives of quiet desperation, and sometimes they can rise above their own frailties.

Just like the person down the street to whom you may nod as you walk by, but whose name you will never learn, the characters in Nine Inches lead lives that remain largely invisible to the world. Tom Perrotta gives them all voice.

Most heartily recommended.
Posted by Barbara Bruederlin at 8:08 am

Short stories are highly underrated. Thanks for the recommend. I'm stocking up my summer reading list.