pass the pipe (and all eleven pipers) 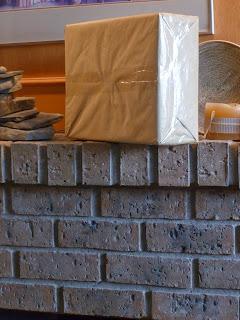 It has arrived. For the eleventh year, without fail, the annual mystery parcel has appeared on our doorstep. There it was, at 5:00 AM, before the newspaper had even arrived.

No postage mark this year either, so either the sender is local (the Spousal Unit's suspicion) or the sender has friends in town (very good friends, evidently) who hand-delivered the parcel in the middle of the night.

I do hope that after this wraps up, with a flourish of twelve drummers next Christmas, the sender of the mystery parcels reveals themselves. I know I am not the only one who is curious about the originator of this tradition.

As long as they don't decide to start all over again in year thirteen.

For those curious about parcels received in years past, here's the chronology:

So exciting! I was wondering when this year's parcel would arrive. You have some serious friends/stalkers. :)

It is the weirdest thing, Eugene and not without its controversy.

It's a little creepy sometimes, Karen, but so far nobody has died or had their pet bunny boiled.

As long as nobody's head shows up in a box, it's exciting, strange, fun and mildly creepy! Love it but perhaps glad it's not me on the receiving end (or sending end - I haven't known you that long).

Thankfully no Gwyneth head in any of the boxes so far, Dale. Mind you, we haven't opened this year's yet, but it smells okay.

I think I would be opening that with the bomb squad robot.

Wise advice, Chris. Would you have a lead on where to rent one?