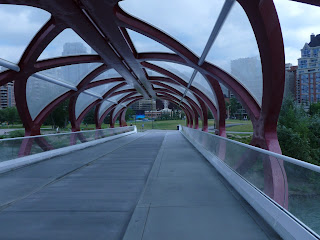 We didn't do nearly as much city hiking as we normally do, but we did manage to get a couple of hoods explored. I had to admit, shamefacedly, that I had never actually walked over the controversial Santiago Calatrava bridge before.

I have driven by countless times, of course, always admiring the dramatic statement the bridge makes. And of course I always think "I have got to walk over that giant red Chinese finger trap bridge sometime". But of course, I never actually have time to stop.

That's just one more reason why I love it when the OFKAR comes home to visit. It gives me license to take pause and to be a tourist in my own town.

What touristy things do you want to do in your own city?

Posted by Barbara Bruederlin at 8:30 am

That is a pretty cool looking bridge.

As far as what to do in Denver, I have never taken the tour of the mint, which is supposed to be kind of interesting.

The preponderance of Calatrava bridges popping up all over the place would beg the question whether these are the Emperor's New Bridges if they weren't so shucky-darn nifty. This one is very cool, and Chinese finger trap is the perfect description.

I need to do more touristy things here in Greater Redneckia, probably, though I am averse to Budweiser and cow-tipping.

In Yellowknife I've yet to attend a Folk on the Rocks festival or set foot on a houseboat. In a city (town) of this size, it's kind of shameful I haven't did all of the touristy things yet. In a city the size of Calgary, I'd say you're excused!

You are not the only one, SkylersDad. I also never took a tour of the mint, back when I lived in Winnipeg.

I think that Malbec and puppy tipping would be more your style, Phlegmmy! And I would be right there with you.

Oooh houseboat setting foot on would be something that I could really get behind, John. Of course it's easy to say that from a distance...