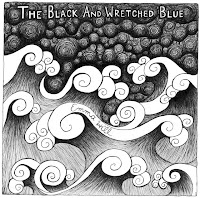 With the release of The Black and Wretched Blue, Emma Hill finds herself physically back on familiar turf, in her home state of Alaska, but there are some sonic touches on the album that conjure up a distinctly more southerly territory. It's a fitting dichotomy for an album that resonates with wanderlust and longing for home.

Hill's honey-smoked voice takes on a soulful growl in many of the numbers, and combined with the horns that periodically kick in to accompany the familiar guitar, banjo and pedal steel, it imparts a bit of a New Orleans vibe to many of the songs. There is still plenty of rootsy sensibility to Emma Hill's music, but it is tinged with a soupcon of jazz.

From the sultry swing of Crushin' to the sweet sadness of The Arrow is Sharp, from the affectionate playfulness of Fallin' For a Girl to the aching lilting cry of A Hundred Homes, Emma Hill shows a maturation that sees her stretching her wings into new musical territory. The Black and Wretched Blue is a nicely nuanced album, full of heartache and joy, that satisfies on many levels.

Posted by Barbara Bruederlin at 3:21 pm

I just streamed a couple of tracks mentioned in your review, and ohmygosh, I really REALLY love her voice. Also "Emma Hill and Her Gentlemen Callers" is giving "Neko Case and Her Boyfriends" some serious competition in the race for my favourite band name ever.

She has an amazing smokey sweet voice, doesn't she, BAP? Glad you enjoyed listening to her!

I'm waiting for somebody to use another favourite term "Lady Friends" in their band name.