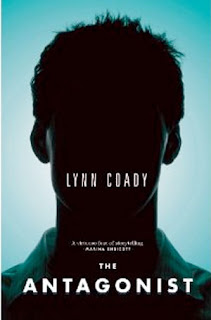 Lynn Coady is a master of capturing the voice and the psyche of people on the margins. She hasn't lost her touch with The Antagonist.

Gordon Rankin ("Rank") grew up bigger and stronger than anyone else in his small town. Although it was contrary to his nature, he was cast early into the role of enforcer. It was a role that he fulfilled reluctantly, in order to gain the approval of classmates, coaches, and especially his own volatile father.

Years after that thug status places him in the line of tragedy, Rank's now quiet existence is shaken when he discovers that a college friend - the only person to whom he has ever divulged his secrets - has written a book that is clearly about him. A book that places Rank in a less than flattering light. Through a series of emails to the former friend, he angrily sets out to take the author to task for this betrayal and to set the record straight. Along the way, Rank begins to question his own memory of those long ago events.

You would never guess that this book was written by a girl. Coady has an unerring ability to portray male posturing in all its guises - in the locker room, in the parking lot, and in the dorm room. But with a deft hand, she is simultaneously able to move beyond the testosterone-laden camaraderie and rivalries, and uncover the motives that put those men into the roles they inhabit.

It's an inner understanding that Rank himself slowly uncovers, via months of unanswered email rants.

The Antagonist is both very readable and carefully nuanced. Well worth the read.
Posted by Barbara Bruederlin at 10:12 pm

Email ThisBlogThis!Share to TwitterShare to FacebookShare to Pinterest
Labels: Can lit, Lynn Coady

The only Lynn Coady I've read was her short story collection, Play The Monster Blind. However, that alone was so good it made me a fan. I'll definitely make my way to this book as well.

I'm pretty sure you would enjoy it, John. It has a few flaws, but nothing major.