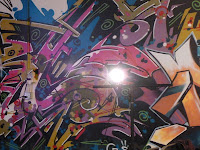 I've got an early Christmas present for you.  So wake-up, kiddos!  It's album giveaway time again.

You may recall from my recent review how gobsmacked I was by XX, the 20th anniversary reissue of Rage Against the Machine's seminal debut album. Normally I am a fairly vehement detractor of the whole reissue thing, but I will make an exception for this one.  XX is actually well worth it.

The special edition I have to give away contains two CDs - a remaster of the self-titled debut Rage Against the Machine album and the original demos for same - and it also comes with a DVD of videos and live clips.  You may just want to give yourself this for Christmas.

Let's have a quick turnaround time for this contest, shall we, to ensure that you get get this special edition under your tree before all the shortbread is consumed.  Contest will close Sunday, December 16 at 11:59pm MT.  Unfortunately the contest is only open to Canadian residents, although of course I would love to hear the musical reminiscences of my non-Canadian friends as well.

So come on!  Take the power back and get in on this!
Posted by Barbara Bruederlin at 11:48 am

Email ThisBlogThis!Share to TwitterShare to FacebookShare to Pinterest
Labels: album giveaway, contest with prizes and everything, free music for free

OMG! OMG! OMG!
Easiest thing for me to remember! I am all excite! 20 years ago, Dev was a wee fella of 2 years old. (so tute!) Dev's Mum was listening to lots of grunge/metal/industrial!
Nirvana was my top favorite, followed by Alice in Chains, Soundgarden, Rage Against the Machine, Beastie Boys, Pearl Jam...and on and on and on. I'm pretty sure you aren't asking for a full list, but I was called "Miss Grunge" by a friend of mine :)
One of my favorite cassette tapes was a compilation put out by Sweet Relief (A Benefit for Victoria Williams) but I'm not certain of the year there...I will have to google it.

The album in question was 1993 :)
http://en.wikipedia.org/wiki/Sweet_Relief:_A_Benefit_for_Victoria_Williams

Probably, my ex's drunken ramble but, to drown that out, I'd say it was likely Pearl Jam's "10" that played for about a year after its release at my house. Grunge, I was grunging.

(PS, It's Deb but I forget how to sign in to my damn blog)

Mel...exactly the same list as yours!...including Sweet Relief (which I have on cassette tape, dammit)

Deb! I made friends with a fellow from Sweet Relief. I got the mp3s (still have the cassette too) I can share...j/s :)

Mel and Deb, so great to step back a couple of decades with you! I can see why you were called Miss Grunge, Mel! Hang onto that cassette tape, Deb, they are the new hipster accessory!
Ladies, your names have both been entered into the big black sorting hat.

ReBelle, I feel like such a meanie! Especially since you visit our home and native land almost enough to be called an honourary citizen.

Wally says the same thing he is listening to today - RUSH (hohoho) Merry Christmas to you guys!

Good to hear that some things never change, Brook! Merry Christmas to you guys too. Hope there are many krokinole games in your immediate future. And tell Wally he's been entered in the draw.

Another grunge guy! Consider your grungy ways to be entered in the draw, John.

Pavement for me Barbara! An original slacker I was... So many great discoveries that year; Jesus Lizard, Teenage Fanclub, L7, R.E.M. and the Beasties. (Not to mention those Aberdeen, WA boys of course.) Twenty years ago, wow! Kinda blows my mind a little.

You slacker, Sean! Actually, speaking of Teenage Fanclub, Norman Blake has just been announced for MTT Fest in Calgary this year. Also Suicide. You may want to come for a visit...
Your name is in the draw, my dear!