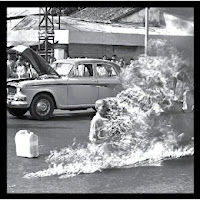 DAMN!  My mind's been blown.

Rage Against the Machine's incendiary debut album may have been released twenty years ago, but it is every bit as powerful today as it was in 1992. The scorching lyrics and explosive hip-hop funk metal with punk leanings are no less revolutionary now than they were when Rage Against the Machine first became the voice of leftist revolution in the American music scene.

The 20th anniversary reissue contains a two CD set - the remastered debut album plus a second disc containing the original demo - as well as a bonus DVD of videos and live clips.  I am not normally a fan of reissues, but for this I make an exception.  The sound on this remastered album is as fresh and startling and in-your-face as the day that this manifesto of sociopolitical outrage first ripped the world a new one.  Rage Against the Machine's explosive power and righteous social anger have mightily stood the test of the decades.

The tight funky riffs, the aggressively spit-out rap vocals, and all that passion contained in that enraged scream still have the power to make the hair stand up on the back of my neck.  You really need to listen!

An amazing album for sure. I really should listen to it again in its entirety.

Make sure the kids are in the room with you, John. They're going to have to learn about violent hip-hop funk metal sometime.

Is that the cover or did you pull that for a punch?

No, that's the original cover, ReBelle. It's the shocking self-immolation of a Tibetan monk, as an act of protest.

Yeah I recognized it.... horrible.

I wonder if they really are to release a new album in the next couple of years.

It is very disturbing, ReBelle.

I can't imagine it could possibly contain the same fire and anger these many years on, Peter. That takes the energy of a youngster.

I think there would be tons of fire and fresh energy should they release new album some time :)
Anyways - I would love to hear what they have to say/play after so many years.

I'm sure they will be very eloquent, Kasia, with lots to say, and the power to say it loudly.