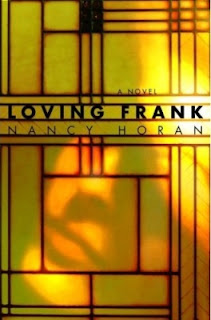 I have long been enamoured of Frank Lloyd Wright's designs, but knew nothing about his personal life.  I knew that he had lived many years in Chicago, where he left behind a plethora of fabulous buildings that I hope to see at next year's Communique, but that's the extent of my knowledge.  So when I spotted a hardcover edition of Loving Frank at a book sale this spring, I grabbed it.

I was somewhat troubled by the fact that Loving Frank is a historical novel, as that is definitely not my first choice in reading material.  I had even more reservations about the scope of the novel - the long-time affair between Frank Lloyd Wright and Mamah Borthwick Cheney.  Since I have been known to run screaming from the mere sight of a romantic novel, it took some convincing for me to finally crack the cover.

Ultimately I am glad that I did.  That's not to say that I didn't have any issues with this book, because I did.  But I did learn a lot about Frank Lloyd Wright (he was sort of a dick) and about the proto-feminist with whom he defied societal conventions.

Mamah Borthwick Cheney and Frank Lloyd Wright, both married with children, fell into a lengthy affair after Wright was hired to build a new house for the Cheney family in Oak Park, Illinois.  Mamah, an early feminist who gave up an established career to marry Edwin Cheney, found an intellectual equal in Frank.  Eventually they both abandoned their families to live together, travelling the world before finally settling down at Taliesin, the house that Frank built for them in Wisconsin.  Mamah eventually obtained a divorce, despite Edwin's initial objections, but Frank, whose wife refused to acknowledge the affair, remained married.

Their lifestyle was considered scandalous by early twentieth century standards and they were vilified by the press. I had a hard time believing just how much time and effort the press put into following every move the couple made, until I thought about the lengths undertaken by modern day paparazzi.

Loving Frank is somewhat unwieldy and the narrative tends to ramble at times.  Both Mamah and Frank come across as being somewhat self-centered in their determination to live their lives in the manner they have chosen.  Mamah, at least, has the decency to feel guilt at the loss of her relationship with her children; Frank just runs up enormous debts.

Mamah Borthwick Cheney is, for the most part, portrayed sympathetically.   Partway into the book, I searched out her life story and was shocked by what I discovered.  Surprisingly, this knowledge did not lessen the impact that the final part of the book had upon me.  That remained very powerful.  Getting there, though, was a mixed journey.

I would recommend Loving Frank for anyone who is interested in the life of America's most famous architect.  But be prepared to slog through a lot of rambling narrative.
Posted by Barbara Bruederlin at 3:55 pm

I read this and the novel on FLW by T.C. Boyle. Neither were good reads but worthwhile for mining nuggets about Wright.

Have you ever been in one of his home/buildings? I must blog soon about our visit to Kentuck Knob last weekend. I would never want to live in a FLW home but I sure appreciate his brilliance. Did you know he designed all the furniture for his homes as well, that is if he had time?

I would love to sit down over tea or perhaps something stronger and chat with you about Frank some day.

I would love that too, ReBelle! I am sure we would have many more topics to tackle, as well.
I have never been to a FLW building, but I hope to have the chance next fall. Please do blog about your recent adventures. I will live vicariously through you.

If you're going to be in the Chicago area, you can visit the Oak Park House, a house Wright designed and lived in. It contains some of his furniture too. They give tightly controlled tours and sell you post cards on the way out. If I recall correctly, we saw from the outside some other Wright houses in the same area. Oak Park is like a western suburb of Chicago but I think they call themselves a village (and the place has a villagy feel in a high-end sort of way).

I've done the Oak Park house and surrounding areas and Fallingwater as well and they're well worth the visit. PBS did a great documentary on good old Frank as well which they'll sell you in the gift shop!

I was hoping to visit some FLW houses while in Chicago, Mr Anchovy, and Oak Park seems to be the epicentre for that. Good to know about the postcards! They'll have to made do, since it sounds like I won't be able to swipe any furniture.

I remember when you made the trip to Fallingwater, Dale. Mostly I remember how jealous I was. Sure am looking forward to that gift shop.

We toured Taliesin West last year in Phoenix...beautiful and unique house in a desert setting. I couldn't help thinking about our Willi and how these two men shared similar views on conservation, housing and the environment, years before the rest of us. Berni

Dad sure was ahead of his time in that regard, Berni, no question. Now I am even more interested to see FLW's houses. I would love to see any photos you took of Taliesin West.

FLW is definitely high on my list of incredible, talented individuals.