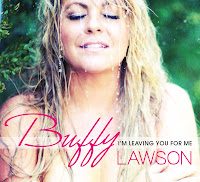 I'm Leaving You For Me
- Buffy Lawson

Buffy Lawson is gifted with the powerful voice and the right degree of twang that's needed to make it in mainstream contemporary country music.  No stranger to Nashville, she made her mark through the years with stints varying from back-up singer to staff writer to part of the country duo Bomshel.  As a songwriter, she has penned songs for such heavy hitters as Dolly Parton, Willie Nelson, and Kris Kristofferson.  On I'm Leaving You For Me, Lawson draws upon life lessons to produce an album of intensely personal songs, songs of heartache and hope, remorse and regret.

Despite the fact that I am not generally a fan of contemporary mainstream country, I was taken with the power of Lawson's pipes and the open honesty of her songs. The bluesy Bread on the Table, with its sassy do-right-woman attitude, backed by a swinging horn section, is a standout track on the album, as is the darkly seductive Runnin'.  The confessional Much of a Lady, with its crying steel guitar, is deliciously reminiscent of honky-tonk angels of the golden age of country.  Personally, I would love to hear that track sped up just a bit and given the full honky-tonk treatment.

Buffy Lawson's I'm Leaving You For Me will hit all the right notes for fans of mainstream country music, and it has just enough diversity to satisfy those of us who long for the old days of country blues and opry.

"...bluesy...swinging horn section...crying guitar...I'll be checking into this one although I'm not a country music fan. Thanks B.

Good for you, ReBelle, for recognizing that sometimes we have to step outside our comfort zones. I hope you hear something you like.

I try to actively avoid mainstream country, but I decided to check out "Much Of A Lady" and wow is that a pretty song. And I love her voice - there's something very warm and honest about it. Not turned off by this at all!

I'm really glad to hear that, BAP. She does have a wonderful voice, doesn't she? Kudos to you for taking the plunge!

I'm not a fan of mainstream country either, but I am of those who you said she's written for (Parton, Nelson, and Kristofferson), so I'm given home. Especially as those 3 are great songwriters in their own right.

The cover photo is... unfortunate, shall we say?

I was suitably impressed to hear that as well, John, those are some pretty big names.
I had a hard time getting past the cover as well.