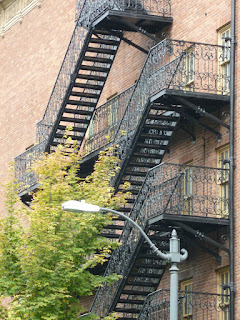 Who remembers PalmPilots?  It was only a few years ago that I would attend meetings at which all the neurologists pecked away at their tiny PalmPilot keyboards with a little stylus.  It looked cumbersome and far more trouble than it was worth.  My boss, in the meantime, kept a tiny daily calendar in his breast pocket in which he wrote all his appointments in pencil.  It was simple and sensible, and I have since adopted the practice of keeping in my purse the smallest daily calendar that I can find.  You don't see PalmPilots around anymore.

What about pagers?  Not long ago, everyone who was anyone had a pager dangling from their belt.  At these same meetings where neurologists painstakingly entered appointments on PalmPilots, the entire staff of white-coaters also carried pagers.  At least once per meeting, a mass page would be sent out with the resulting cacophony of beeps causing a mass exodus of white-coats from the meeting room.  You may still see pagers in hospitals, I'm not sure, but really the only other place you will see them anymore is at restaurants, where they hand one to you along with the assurance that your table will be ready in twenty minutes.

For your consideration:  tablet computers are the new PalmPilot/pager.  I don't really see the point in ipads and their ilk, but then again, I don't carry a cell either, so maybe it's just me.


Do you use a tablet? Why or why not?
Posted by Barbara Bruederlin at 3:23 pm

Email ThisBlogThis!Share to TwitterShare to FacebookShare to Pinterest
Labels: I'm just a luddite girl living in a techno world, stuff I don't get

I carry a date book, one I usually pick up at a museum. I enjoy it - gives me another excuse to use a pen.

A museum date book is an excellent idea, ReBelle. It never hurts to recall a cultural encounter when one is jotting down the dog deworming appointment.

I agree with your conclusion Barbara. These devices are only in vogue until the next better thing comes along.
Technology is how I earn my living. In order for there to be an advantage to humankind, there has to be a benefit from the technology. Tablets and handheld smarts are currently causing many physical problems for their users, with regard to neck and wrist strain. This however, is not the only debit.

When I was a lad, a thousand years ago, we all imagined a cyborg future, where bits of computer would be embedded within us, taking us toward the future where we became one with the machine.
This has now happened, but not as we envisaged. The machine has turned its electronic nose up at us, shrieking with distain at how it would not entertain being entombed within a dirty stinking human. The machine has crept up behind us and placed itself in our pockets.
The party in our pocket, all bells, whistles, lights and entertainment beyond our imagination. We are happy to provide the muscle power required to transport the machine around, where it keeps track of where it is, what its transport mechanism is purchasing, and whom its transport mechanism is talking to via social media et al.
And any presumed benefit to humanity is simply the Lords of Code Zucking at the firehose of our combined intellect, so that we can be presented with new opportunities to purchase more clutter.
I am not a fan of this abysmal electronic future we have set for ourselves.
I apologise from this rant-ette; I am currently in great distress because I missed my own deworming appointment today. My carpet is in such a mess!

I'm not a tablet computer/android phone person either. I don't really see the point of them, either. I already have a cell and a laptop, and that's quite enough technology to be dealing with at any point in my life. But tablets are fairly ubiquitous in lecture halls these days, and I'm actually a little sick of seeing touchscreens all over the place. ipads, ipads everywhere!

So you are saying that we have already welcomed our robot overlords, Sans Pantaloons? An interesting angle. I never thought of it that way, but by crikey, you could be right. And you just know that none of those supreme electro-gods will offer to clean that carpet.

You are very sensible, BAP. I'm tired of only ever seeing the tops of people's heads as they sit in a room together and text other people.

i do carry a cell phone but I am not popular enough to have it ring very often. When it soed I tend to look around and wonder why that deaf idiot doesn't answer his / her phone and then I realize that idiot is me

I carry a cell for work, but I don't have a personal cell. I do carry a little black notebook that I use for everything from scraps of ideas to shopping lists to doodles. I'm quite attached to it.

We do have a tablet at home and I use it quite a bit. I read occasional books on it (I'm still not quite used to that) and surf around the net and do sudoku puzzles and that kind of thing. I mostly blog on our desktop though.

I would likely either do the same thing, Kelly, or forget which button to press to answer.

I always keep a notebook on me as well, Eugene. You never know when you are going to have to jot something down!

ha, you just reminded me, I do that too! I don't know how many times I've hung up on people because I hit the wrong button when answering

Okay old people, smart phones and tablets are a necessary fact of life. TV wasn't a fad either.

It's not just me, Kelly? Awesome!

They may be a fact of life, John, but I am not convinced they are a necessity.