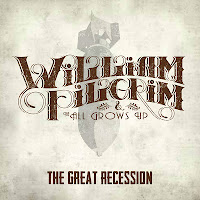 The Great Recession
- William Pilgrim
& The All Grows Up

The debut album from William Pilgrim & The All Grows Up is a testament to the power of music and to the resiliency of the human spirit.  The Great Recession blends blues, roots, and a touch of gospel with a wide-open rock beat and a finger-snapping swing. Frontman Ish Herring has a bluesy voice that sounds much older, more worldly than his less than 30 years.  And there's a good reason for that.

The genesis of William Pilgrim & The All Grows Up is a story that is at least as compelling as the music itself.  You just know that any band that names itself after a Kurt Vonnegut character has got to have something interesting to say.

William Pilgrim & The All Grows Up was born in Los Angeles when singer-songwriter/producer PM Romero answered an ad for musical collaboration from a homeless musician, Ish Herring.  As the child of a drug-addicted mother and a broken home, Herring had been shuffled around from foster home to foster home until finally finding himself living on the streets of New Orleans and then LA.  Having always found comfort and meaning in music, and having taught himself guitar, piano and drums, he placed an ad offering vocal services for hire.  That ad led to the collaboration with PM Romero, from which the band was born.

The Great Recession addresses questions that stem from Herring's life, questions of social alienation, disenfranchisement, and free will.  But there's hope in the big swinging vibe, and in the gloriously hopeful touches like the hand-clapping gospel choir that takes things home on songs like Farewell and Beautiful.  This is an impressive debut album, filled with songs that have you bopping your head and singing along, while reaching for your battered old copy of Slaughterhouse Five.

Email ThisBlogThis!Share to TwitterShare to FacebookShare to Pinterest
Labels: album review, blues rock, Vonnegut-inspired music, William Pilgrim and the All Grows Up

Here in NW Pa. Going to Kentuck Knob tomorrow - one of FL Wright's homes. Falling Water is booked but not this home which is still owned by and resided in from time to time by Lord and Lady Palumbo. It is said to be filled with lots of art they have collected from all over the world. Also meeting friends in the afternoon then on Sunday we all go to the NFL game in Pittsburgh. In the midst of all this I have to find time to go to a cyber ball. By all means please come to that.

You are living the life, Rebelle! Enjoy! Are you sure you won't extend your invitation to include the FL Wright tour, though? I am mesmerized by his architecture.