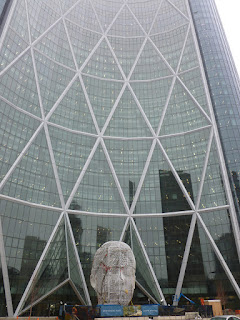 I was back at the BMO Centre at the Stampede Grounds yesterday, following up last week's Vital City Report with yesterday's Centre City Congress.  We city lovers are the new bronc riders, apparently.

It was a different crowd at Centre City, though.  Where the Vital City Report was populated with NGOs and educators, Centre City Congress was filled with dignitaries and captains of industry.  I wound up sharing a table with three Aldermen and the GM of Transportation for the city.  They were quite gracious, despite my obliviousness to most of the in-jokes. I really must brush up on my municipal witticisms.

The Spousal Unit and I met downtown for an early supper.  Seriously early - senior supper early.  We tried a new Vietnamese restaurant in Arts Central.  The coconut shrimp appetizer was lovely - fat, juicy shrimp in a crispy coconut batter with a zesty dipping sauce.  The mains were a bit mixed.  My noodle bowl was a bit bland with the wrong meat, but the SU's salmon was perfect, although they seem to have forgotten the coconut part of the coconut rice.  It was a beautiful room, with dark gleaming woods and orchids and a stainless steel ceiling, and we will likely return.  Probably just for appetizers, though.

After dinner, the Spousal Unit headed home to dole out belly rubs to the SRK, while I headed to work to facilitate Blues Mondays at the NMC.  Sometime during the evening, the fog that had been flirting with the tops of the downtown towers swooped down to ground level and socked everything in its clammy grip.  Imagine my delight, when I finally climbed into the Urban Assault Vehicle near midnight, to discover that some sonofabitch had stolen my windshield wiper.  While I was parked in a well-lit lot that cost me a king's ransom. Next time I'm parking in a back alley beside a dumpster and take my chances.

I'm avoiding driving during the snow for the next couple of days, until I can find time to buy a new wiper blade, which, of course, I will not be able to install myself, since it's no longer possible to fix anything on a vehicle with only a screwdriver.  It almost makes me miss old Russell, whom I used to start by propping open the carburator with a nail file while I revved the engine. I felt like such a G in those days.  Now I will have to go bat my eyelashes at the service station guy just to put on a new wiper blade.  How far we have fallen.

What skills have you lost to technology?
Posted by Barbara Bruederlin at 8:27 pm

Email ThisBlogThis!Share to TwitterShare to FacebookShare to Pinterest
Labels: griping and rambling, my Calgary

So irritating how high tech vehicles are now...

It makes me feel like a prisoner of technology sometimes, ReBelle.

Who steals windshield wipers? I didn't even know that was a thing. There is no purpose in that other than to mess with you.

I hope it hasn't suddenly become a thing, Lesley. I don't want to live in that reality.

At best I had very bad handwriting but technology has ruined any hope I had in that department. I can type like the wind and everybody can read it too.

Oh how true, Mr Anchovy! I am no longer able to read my own handwriting, which makes things tough when I take notes during interviews or presentations. I need a very small portable typewriter.

I don't even remember how I used to check e-mail before technology came along!

Honestly, who steal that? I hope you were able to get it fixed. I tried putting on my own once and it didn't end well.

I remember those days well, Dale. We used to have to physically go into the cave to read the drawings. So inconvenient!

I didn't have time to try this week, Al, so am waiting till Monday when my corner service station is open. In the meantime, I am avoiding driving through slush.