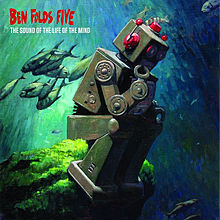 The Sound of the Life of the Mind - Ben Folds Five

The Sound of the Life of the Mind is the first album in thirteen years by the newly reunited Ben Folds Five.  Evidently not all that much has changed in thirteen years, because the album sounds very much the way you would expect it to sound.  This isn't actually a criticism; there is something sonically comforting about revisiting familiar territory in new music.  If you are looking for piano-driven nerd pop, the music of Ben Folds Five is one of the first places you should look.

The album is peppered with heartfelt piano ballads like the wistful Sky High, Hold That Thought and Thank You For Breaking My Heart.  The lead track, Erase Me, is a falsetto-belting, piano-pounding rock opera, while its successor, Michael Praytor, Five Years Later, hearkens back to the glory days of surf choruses that wouldn't feel out of place on a Beach Boys album.  Power pop ballads like Draw a Crowd and Do It Anyway dip into the well of the trademark BFF sassiness with lyrics like "if you can't draw a crowd, draw dicks on the wall", "it sucks, but do it anyway" and "read me off the list of things I used to not like but now I think are okay". These tracks are sure to be future concert crowd pleasers.

With the release of The Sound of the Life of the Mind, the reunited force of Ben Folds on piano, Darren Jessee on drums and Robert Sledge on bass offers up a brand new, yet vintage Ben Folds Five album.  Ben Folds Five fanatics around the world are going to lose their collective shit over this album; the rest of us can enjoy it as a strong musical release in what has been a mixed year for new releases.  Certainly worth a listen.

BTW - if you haven't listened to the Sun Kil Moon record yet I would highly recommend it - some of Mark Kozalek's best lyrics to date. Lot's of self deprecating and wry observational stuff that I think you would appreciate.

I liked it, Matthew, I'm glad I took a chance on it.
I am just listening to Sun Kil Moon now, actually! I figured it would be great Sunday morning music (which it is). Very wry and sly. Thanks for it!

BFF. Never made that connection before.

Nor did I, John, but once I did, it seemed to fit.