the fruit left lying in the grass 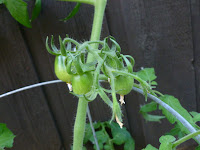 I've had to triple my garlic budget allocation, after rediscovering my brother-in-law's Caesar salad dressing.  People have been known to lick the empty salad bowl to get the last drops of garlic-anchovy nectar on their tongue.

I'm not sure why I used to think it was a finicky recipe, because it's really quite simple.  And because you use so little of it to dress a salad, a batch will last for a couple of weeks, even if you make Caesar salad almost every night, like I have been doing lately.

After an extended dry spell, I am suddenly listening to a lot of new music again.  Bands, record labels, and friends have been filling my mailbox and inbox with new releases.  All that exposure to new cover art and liner notes has triggered a musical lusting in me, one that lay dormant for a couple of months.

But in amongst all that new music, it's been especially satisfying to rediscover some older music.  Patti Smith's Horses was a record club discussion topic recently, and that discussion triggered memories of dorm rooms and musical awakenings.  Stumbling upon Jim Bryson's The Falcon Lake Incident - an album which I bought at a show last year but never really listened to properly - brought back memories of long-forgotten Manitoba folklore, but more importantly, opened my ears to what an under-appreciated musical treasure Jim Bryson is.

Just when I thought I knew it all.


What have you rediscovered lately?
Posted by Barbara Bruederlin at 8:55 am

Email ThisBlogThis!Share to TwitterShare to FacebookShare to Pinterest
Labels: music is crack, rediscovery, thought for food

Ooooh you can't just tell us how wonderful it is and then leave us hanging. Any chance of sharing the recipe???

I guess that was sort of mean of me, wasn't it, Karen and Rebelle? Let me get approve from the brother in law to share his secret recipe and we'll see what we can do.

Just don't forget the anchovies in the dressing

The anchovies are an integral part, Mr Anchovy! As you are well aware.

It is great on baked potatoes as well! The recipe is truly a keeper!

On baked potatoes, Kathy? Somehow I can't quite picture that. But I'll keep it in mind.