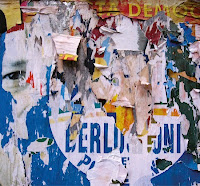 I'll Be There Tomorrow
- the Sumner Brothers

There's no reasonable explanation why I have not heard The Sumner Brothers before, except for the fact that I haven't.  Shame on me.  The Sumner Brothers'  brand of authentically rough and poignant home-made music is exactly what I need some days to feed my soul.  So if you are looking for some gritty and soulful alt-country that will rip out your heart and perhaps knock out a few teeth, I would suggest you give these fellows a good listen.

Hearkening from that bastion of country music - Vancouver - brothers Bob and Brian Sumner tag team on lead vocals on their new album, I'll Be There Tomorrow.  Filled with songs of death and regret, hopefulness and cursing this god-forsaken life, I'll Be There Tomorrow is a satisfying offering of original songs, with a couple of fine covers thrown into the mix.  There's a beautiful cover of Townes Van Zandt's stunning Colorado Girl and a breakneck psychobilly meets the Ramones version of That's Alright.

There's something in the timbre of Bob's voice, the way it catches and breaks, that puts me instantly in mind of Frightened Rabbit's Scott Hutchison.  Minus the Scottish accent of course. It's a voice filled with heartache, beautiful yearning heartache.  This is particularly true on the moving Outside Looking In and the sadly hopeful You Will Find Me.

Brian, on the other hand, possesses an authoritative baritone that conjures up the ghost of Johnny Cash.  Backed by a softly weeping guitar, the tracks on which Brian takes lead vocal ache with all the weariness of  the world.  His commanding snarl on the lead track Toughest Man in Prison Camp will have you believing, beyond a shadow of a doubt, that he is indeed the toughest man in prison camp.  It's an odd song, however, and with its hillbilly hip-hop vibe, it feels a little removed from the rest of the album.

But if I'll Be There Tomorrow begins with a raucous barn-burner, it ends on a beautifully reflective note, with the thoughtful instrumental I Would Love You in the Kitchen.  You really need to listen to this album.

I'm told by those who have seen the Sumner Brothers perform that they are a stellar live band.  Luckily for us, they are currently on tour across western Canada and will be touring the US west coast in November.

Posted by Barbara Bruederlin at 2:50 pm

I just checked out these guys on the YouTube machine and I like what I heard! Thanks for pointing to them.

Thank goodness for the YouTube machine! I suspected you would like the Sumner Brothers, Eugene; they are pretty awesome.