you can't get there from here 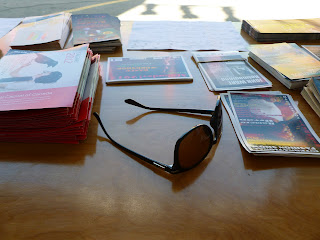 When you are staffing a Calgary music festival booth at the Stampede, you get a quite a few people stopping by to ask questions.  Not all that many questions are about festivals, however, or even about music.

Here are some of yesterday's queries:
-   Where do I pick up tickets to see the Super Dogs?
-   Is there a kids' midway?  Where is it?
-   I'm trying to get to Banff.  Is there a bus or something that goes there?
-   A few years ago, the Lions Club used to barbeque an entire cow to make beef sandwiches.  Do they still do that?


Oddest question you have ever fielded at work?

*~*
In other news, we have a winner in our Hundred Thousand Pieces album giveaway contest.

Jen rocked the nostalgia vote by suggesting Ryan Dahl from Limblifter should release a solo album, while Sean made us smack our foreheads and go of course, with his suggestion that it was time for Arcade Fire's Win Butler to release a solo album.  It was a squeaker, but ultimately Sean's name emerged from the big black sorting hat.

Give it up for Sean!
Posted by Barbara Bruederlin at 6:31 am

Email ThisBlogThis!Share to TwitterShare to FacebookShare to Pinterest
Labels: contest with prizes and everything, Stampeding

I get questions all the time like that at the museum.

A lot of people think we should know the numbers or have information on all other museums in BC. When I first started I might have looked up a number, or something quick for them. Now, I bluntly say. "Use Google. I'm not a phonebook."

But really, is there a bus that goes to Banff?

You really don't have all the phone numbers plus business hours to all the BC museums memorized, Al? For shame!

I applaud your bluntness! We should all do that more often. "Do I look like Greyhound?"