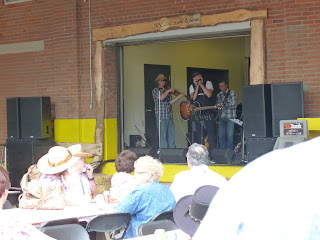 For the past decade or so, my Stampeding has been limited to watching the chuckwagon races on tv in the evenings.  The crowds, the heat, the sun glaring off the pavement and the rides - they have all lost whatever appeal they may have once had.

This year, however, being the 100th anniversary of the Calgary Stampede, means that it's going to be even so nutso than usual.  Case in point, 70,000 people attended a pancake breakfast in the parking lot of Chinook Centre mall on Saturday.  I like a free pancake as much as the next guy, but not if I have to elbow 69,999 hombres out of the way to get it.

I will be working for National Music Centre at Stampede for a few days this week, staffing the NMC booth.  I am prepared to sacrifice a goat and three small children to ensure that the booth is not in the direct sun.

There were a couple of Stampedey-themed activities on my dance card recently. 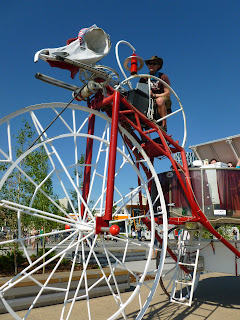 The first was Stomp & Strum at National Music Centre, held shortly after the parade wrapped up, on the first official day of Stampede.  In the 45 minutes it took me to drive there, I managed to set a new land speed record for getting sick of Stampede.  Dodging oblivious wandering cowpokes and those guys with flags standing in the middle of the street waving people into impromptu parking lots, avoiding collisions with rubber-neckers, and duly noting official signs reading "No Parking on Centre Median" confirmed that crazy season had arrived.  But it broke my heart to find that I had arrived at NMC mere minutes after Mondo Spider  had departed.

However, I got to hang with his Beakerhead buddy, Daisy the 4-metre steam-punk solar tricycle, the next day at East Village Vintage in the Village, so that was cool.


What deep-fried fair food on a stick do you recommend I
sample while I am on the Stampede grounds this week?
Posted by Barbara Bruederlin at 10:00 pm

I have never attended Stampede, although some of it sounds fun, the idea of the crowds turns me off it completely

Even the crowd at our little musicfest here this weekend keeps me away.
http://www.islandmusicfest.com/performers/2012-performers/

although I think I would feel better doing that than I feel now after going downhill over my handlebars earlier today. nothing broken, only bruised

Like Kelly, I've never attended Stampede either. I'd saddle up for a free pancake breakfast, that's for sure, but the crowds, noise, heat and what I feel is animal cruelty? I'll pass.

Even here in Edmonton, I don't think I ever went to Klondike Days or, its sad latest reincarnation "Capital Ex". At least you guys know how to do it right: pick a theme and stick to it!

And if you need an extra goat for your sunfree sacrifice, I know people...

I want to go with you! I think I can make it if I leave now.

Ouch, hopefully those bruises heal quickly, Kelly. I feel your pain though, still hobbling around with a bruised tailbone 2 weeks after the fact.
Islands folk fest sounds amazing this year! Laurie Anderson, Emmylou Harris, Richard Thompson, Buffy St Marie? You've got some major star power happening there. No wonder you have crowds.

Aren't they now considering changing it back to Klondike Days, Karen? At least that has an identity; Capital Ex - not so much.
I'd prefer to sacrifice an extra child over another goat, but I'll take what I can get.

Grab your passport and your hat and boots and I'll meet you at the airport with a pancake, Lesley. We'll have a blast.

Too many crowds for me, and not really my thing anyway. Although I do like the plaid...

It's always fun trying to distinguish hipster plaid from cowboy plaid, Al, especially with Stampede coming on the heels of Sled Island. The crowds though, are insane. Apparently 185,000 went to the Stampede on Sunday.