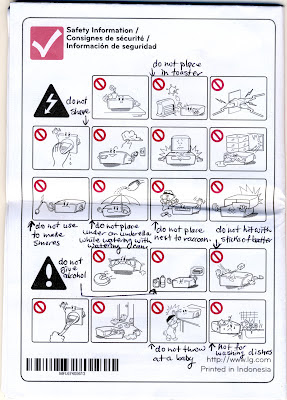 Zombie Central has been dragged kicking and screaming into the 21st century with a trial run of Netflix (or The Netflick, as it is known in these parts).  Of course, not being owners of a smart TV and shunning such contraptions of the modern world as Wii, PS3, Xbox or Gameboy, this necessitated our buying a Smart TV Upgrader for our regular dumb TV.

Although our technoweenie selves were rendered near apoplectic trying to hook up to our wifi (until we stumbled upon the well hidden cap lock function), we eventually managed connectivity.

Of course being responsible gadget owners,we carefully perused the safety pictograms that accompanied the upgrader. I think we interpreted the drawings correctly...

Can you help us fill in the ones we missed?
Posted by Barbara Bruederlin at 9:39 am

Email ThisBlogThis!Share to TwitterShare to FacebookShare to Pinterest
Labels: I'm just a luddite girl living in a techno world

Those pictures are amazing!!

The first one: do not use as a coaster?

Glad you were able to get everything set up.

Ah, good one, Al! And I would have been so tempted to use it as a coaster, too. Also a plant stand.

Anytime I set up anything electronic I'm always courting disaster. You got through it. You did good.

If any of us had become impatient, we would never have muddled through it, Mr Anchovy, but amazingly (to us, anyway) we all managed to remain calm and methodical.

You missed the "do not fart in adjoining room" rule.

How could I have possibly missed that one, John? And it's such a sensible rule, too.

attempting to be back to some extent, don't expect much

That's you, Kelly? Good to hear you'll be blogging again! I'll be over to visit.