humanity on the battleground 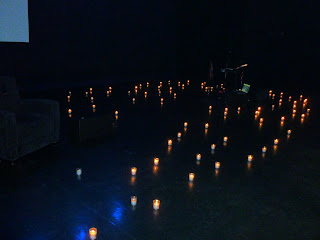 Another Day in America- Laurie Anderson

Onto a darkened stage that is a veritable minefield of lighted candles, Laurie Anderson, understated in cropped black pants and a simple white shirt with a black tie, steps up to the microphone and begins to speak. Her words, measured and chosen with the care of a poet, are at once personal and profound. She has a voice that commands - commands attention, commands belief, commands imagination, commands compassion. It's another day in America.

So begins the premiere of Anderson's latest creation, a work-in-progress that meshes soundscapes and home movies, anecdotes and big questions, music, ideas and memories. It's an evening that those in attendance won't soon forget.

The audience on this particular evening was definitely skewed toward the slightly older, well-heeled crowd, which was not especially surprising given the $50 per ticket price tag. Not a particularly exorbitant fee, but not chump change either. Given the expectant hush that fell over the crowd as Anderson took the stage and the rapt attention with which all hung onto her words, I doubt that anyone regretted forking out the money. As if you could put a price tag on the chance to spend the evening in the presence of a contemporary visionary.

During the ninety minute show, Anderson led us through series of anecdotes that were simultaneously quirky, profound, and humourous. In her bemused, measured voice, she told stories of visits to tent cities, where the inhabitants maintain a tenuous thread to their former lives through the last vestiges of politeness. She related Darwin's thorny problem with peacocks, how to explain the existence of their tail display in the context of survival of the fittest. In a dreamlike monologue, she reflected on the recent signing of the American National Defense Authorization Act, which transforms American soil into a de facto battleground. These big questions were punctuated with haunting violin solos, allowing time for absorption and reflection.

And, of course, the Voice of Authority made an appearance. As I listened to the deep-voiced male character that Anderson creates using a voice filter, I was immediately struck with the realization that this must be who The Voice from the CBC's The Current models himself after. It explains so much, and only cements the impact that Laurie Anderson has had upon pop culture.

These moments of observation and pondering took an intimate turn when Anderson left the podium and waded through the sea of candles to an armchair, flanked by a screen. Along the short journey, Anderson shed her poet-seer persona and, as she lowered herself into the chair for a good chat, began to share tales (and video clips) of the life and death of her blind piano-playing rat terrier, Lolabelle.

But of course, even while sharing these stories of her personal home life, Anderson did not shy away from bigger picture. Perhaps not surprisingly for an artist in her sixties, she used the experience to look for ways to embrace the inevitable approach of death.

And then she stuck a pillow speaker into her mouth and played a song on it that was an eerie combination of ethereal throat singing and robotic instrumentation. Of course this made me wish that I was able to see Laurie Anderson as she is let loose among the instrument collection at Cantos Music Foundation/National Music Centre later this afternoon, if only to see what she puts in her mouth.

Despite the length of this review, it's very difficult to actually characterize the experience of seeing Laurie Anderson perform Another Day in America. It felt like a rare opportunity to see a contemporary visionary at work. At the same time, it was deeply personal. I will be thinking of this evening for a long time.

For background information on Laurie Anderson's amazing life, so far, please check out the primer I have put together.
Posted by Barbara Bruederlin at 12:12 pm

Wow. And thanks for the link to your primer. I'd never heard of her before!

As I think I've said, I love Laurie! Great review Barbara, I saw her a couple of years ago and it was an experience that stays with me.

She's been around for a long time, WC, and has accomplished more than most people do in 10 lifetimes.

I'm not at all surprised that the experience has stayed with you so strongly, Dale. I won't forget my evening with Laurie either!
We need to sit down with a bottle of wine and compare notes.

Wow, sounds like it was quite the performance. What a great way to kick off the new year, with wonderful art.

I still need to see her video exhibition at the Glenbow, Al, but I've got a few months to do so. Great start, artwise, indeed.

She is a performer who for me is stuck in time. I suppose that has to do with the fact that back in my university days, I was very aware of what she was up to artistically but haven't followed her work since. How did she get to be in her 60s? It was only yesterday it was 1982. I bet it was a fantastic performance!

I could have sworn it was 1976 only yesterday, Mr Anchovy! It was a wonderful performance, though, even for us old folks. And artists like Anderson only get better with age.

Knew she was from the Chicago area-- just looked it up; she's from Glen Ellyn, the most suburban of the suburbs here (my folks lived there for a few years). Figures a place as boring would turn out someone as interesting as her.

There's something to be said for the creativity that's sparked by the boredom of the suburbs, Johnny!