the sky filled with dust and silver

It was probably somewhat of a blessing that we lost power for over three hours this afternoon, because we couldn't hear the emergency broadcasts that were being aired. The wind freaked me out enough already without hearing that a state of emergency had been declared for the city, and the entire downtown closed down due to windows blowing out of highrises this afternoon.

It's amazing that nobody was killed.

The scene from our backlane indicates that we escaped relatively unscathed. I wasn't able to make the planned chili for Grey Cup but at least I have a roof over my head. 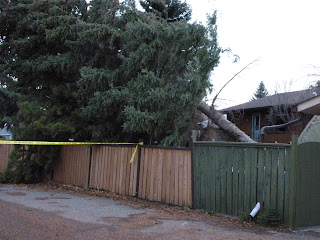 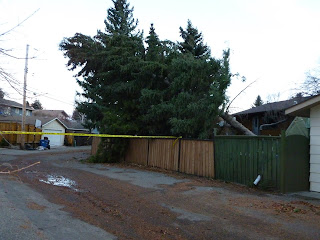 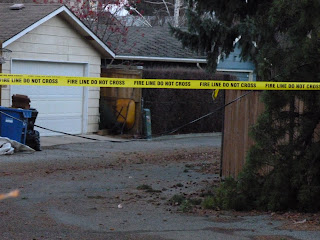 Posted by Barbara Bruederlin at 7:36 pm

I read about your extreme weather system. We too have been having crazy wind and rain but nothing like you had today. Glad you and your house are still intact. How was the cat during it all?

The cat was the smart one in this situation, Toccata. Instead of fretting and peering nervously out the windows like me, she crawled under a blanket and slept through the whole thing.

It was pretty dang terrifying, Lesley. I've always hated wind; this will do nothing to change my mind.

Scary stuff! Hope they get that power line fixed soon.

Holy crap! We had wind here, too, but that's ridiculous. I'm glad you stayed safe & that you didn't lose parts of your house!

Hope all is calm now...whew! Hair-raising I'd say.

We hardly ever get any wind here, but as it was pretty unusual to have it that bad in Calgary, I'd never say never. I have a thing for trees, so that's a pretty sad picture.

We were wondering how you were fared during the wind. Glad it was only a power outage and nothing more.
I understand Lethbridge didn't fair so well either.