from the dental chair 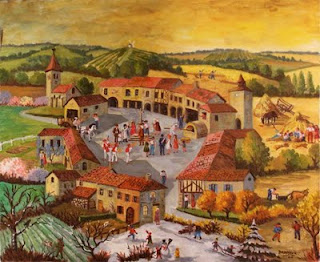 It was while cooling my heels in the dentist's chair yesterday, waiting to have a chipped incisor patched up, that I realised I have not stopped to look at the world around me in some time. Oh sure, I look around me, especially since I am now taking photographs as part of my event covering duties. But I don't really look; I don't calm my pulse and just let the world unfold for me.

But yesterday, I had nearly an hour to watch the world unfold out the second floor window. The dental office is on a bit of a hill, with floor to ceiling windows facing west, so the panorama presented to me was reminiscent of those naive paintings you sometime see of village scenes that bustle with activity, a barn raising in one corner, a busy marketplace in another.

While the sun broke from the clouds and settled in the evening clearing of a chinook arch, I watched a row of school buses pull up to a distant middle school. I saw the ant-like figures that had been running up and down the yellow strip of playground suddenly turn and move en mass toward the waiting line of lego buses.

I was struck by the predominance of evergreens in the city, the number of brown roofs, how movement never stops, even in suburbia. I could have happily watched all day the life of the city unfold before me.

I am not complaining about being busy, don't get me wrong. I am so grateful that I now have as much work as I can handle. Work that I love.

But writing all day every day does tend to quell the urge to write in my spare time.

For instance, I really should have told you about Any Night, the play I saw this week at Sage Theatre. It was a real thriller, a rather Hitchcockian study of sleep disorders, privacy, and the true intent of the guy who lives in the apartment above you. I really should tell you more about it, but I did see it late in the run, so unless you really hustle to get tickets for the final night, you've missed it. Which is a shame, because it was well worth seeing.

Staying behind for the talkback session with the actors, who are also the playwright team behind Any Night, was particularly enlightening. I love having theatre students in the audience for talkback because they ask questions I would never be able to dream up, not in a million years. It's like listening to a conversation in a foreign language, but one that makes complete sense to you.

The next night, at PechaKucha, I learned some new words that I fell in love with immediately.

The first was Moh' kins stisis, which is the Blackfoot word for the territory encompassing the city of Calgary. The Blackfoot traditionally viewed the earth as a human body and would name geographical areas for the body parts that they resembled. So in the larger Blackfoot worldview, the direct translation of Moh' kins stisis is "elbow", which refers to the crook of land where the Bow and the Elbow river meet. The birthplace of Calgary.

The other term that struck me at PechaKucha was Genius Loci, spirit of place. It's a term that city planners use to pinpoint the defining characteristic of a city.

What is the genius loci of your place?
What's your new favourite word?
Posted by Barbara Bruederlin at 6:42 pm

I love those calm moments in the chair before they start pulling my mouth apart.

My new fav word is this word verification: genhasty...I'm defining it now....

Interesting, Mr Anchovy. It's our new activities that make us stop and smell the mushrooms. It's another great argument for trying something new periodically.

It's funny the places we find our all too brief moments of zen, Leazwell. I also like car washes for that purpose. Except I only wash the car twice a year...

While I am not one that dreads the dentist's chair whatsoever, I do wish I had that inspirational view!

Come on up and I will take you to my dentist's office sometime, Lesley. We might even get some free toothbrushes and floss out of the deal.

I haven't felt like writing at all lately, perhaps too because I do so much of it at work. I need to be lifted out of my funk though. Perhaps the holidays will help.

I think perhaps each of us only have a certain number of words per week in us, Al. I do hope that the holidays will help. Maybe you need a hobby that doesn't involve writing - salsa lessons, cake decorating?