why I review albums 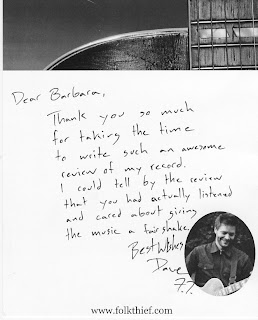 Because everybody needs to know that they are being heard.

Because if somebody is going to make the effort and incur the expense of sending me their CD, the least I can do is to listen with an open ear and an open mind, and then tell the world.

Because an album is a work of art that someone has poured their soul into, and you don't ignore the product of someone's soul.

Because reviewing gives me a platform to express my opinions, be they admiration, disdain, joy, horror, or surprise.

Because reviewing someone's album is a gateway drug that can lead to personal encounters.

Case in point - a few days ago I met Folk Thief, a musician from Vancouver whose album I reviewed a few months earlier, and his touring partner, My Boy Rascal. It was a comfortable and laid-back show at a coffee house in Kensington, a few tables gathered around the stage area by the fireplace. My Boy Rascal started the evening with a heartfelt acoustic set and then proceeded to endear himself to us after his set by coming around from table to table, shaking hands and expressing thanks to everyone for coming to the show.

Folk Thief was equally charming. Delighting us with good-natured and self-deprecating banter between haunting songs of love, heartache and oblivion, he took us on a sonic road trip of evocative imagery. A particularly nice touch was the addition of covers of Bob Dylan, Townes Van Zandt, and, of all things, Beastie Boys songs.

The beauty of a coffee house concert is the intimacy that it affords, not only during the performance itself, but after the music stops as well. We were able to chat at length with both musicians while they struck down the stage, and ultimately left the coffee house feeling that we had made human connections beyond the bond of music.

And that's why I review albums.
Posted by Barbara Bruederlin at 7:14 pm

Great post, Barb. I like reviewing CDs because I honestly love to promote music I love and believe in. And my reviews have been noticed! I now review for two metal web zines!

It feels great to be able to promote the music we love, WC. I think of it as doing my part to spread the love.
You write for TWO metal web zines now? You are a reviewing machine!

I love the intimacy of coffee house/smaller venues. Find you're able to appreciate the music a little bit better.

For the most part that's true, Al, but sometimes the business and the chatter of a coffee shop doesn't stop for the music, which actually makes it harder to hear. Still far preferable to a stadium though.

Similar to reasons why I review books.

I had wondered about that, John, as reviewing as many books as you do is a big committment.

It was a great evening!

Good times all round, UB!

Isn't it heartening to meet artists who are passionate about sharing their work, and are not merely political or social animals bent on world domination? Good on you and good on them. I'll check them out-- they sound like good people.

It's all very life-affirming, Phlegmmy, meeting up with good people who make good music. Do look into their music!