flags and ribbons, smiles and guns: Olenka and the Autumn Lovers house concert 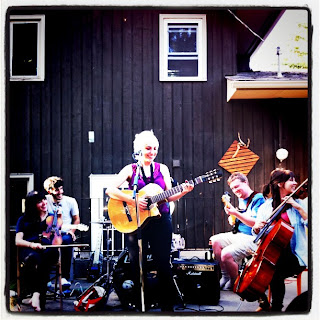 The smiles captured by my friend Jeff's camera sum up the evening perfectly. The return engagement of Olenka and the Autumn Lovers to casa del Zombie was an evening awash in laughter, a celebration of friendship and camaraderie.

It seems an odd juxtaposition, that there be so much mirth accompanying a band whose songs often detail the struggles of the politically oppressed, the downtrodden. Poignant songs of loss and revolution rang out into the calm of the evening, escaping the embrace of tiny spruce-enclosed yard, Olenka's heart-wrenching voice occasionally punctuated by an incoming 737. But somehow, the odd low-flying jet, the occasional bark of a neighbourhood dog, only served to make the music more powerful. To have the luxury to relax in a suburban backyard, surrounded by friends, neighbours and hardcore fans who would brave Calgary transit on a Sunday for a trip to the southeast, all the while being sonically transported to a Poland struggling under communism, really magnified how privileged we are to have these special moments.

When an abbreviated version of Olenka and the Autumn Lovers first graced our house last May, everyone in that living room was stunned by the power that could be transmitted by three women, a guitar, a cello and a violin. To experience the richness of the full band, six people with guitars, bass, drums, cello, violin, and the sweetest slide guitar you could hope to hear, outdoors on a beautiful summer evening, was really something quite sublime.

Olenka and the Autumn Lovers played two sets, allowing us all time to mingle and refill our plates and glasses between bookends of song. Despite the hostess with the big glass of wine (who obviously succumbed to the lure of the microphone) insisting upon delivering both introductions and denouements, the show was magical. With the power of bass and drums mimicking the raw power of Olenka Krakus' iconic voice, with the poignancy of her words reflected in the sweep of the violin and cello strings and in the cry of the lap slide guitar, we were all transported by the music of this incredible band.

Powerful musicians and performers they are, but also wonderfully warm and funny human beings. Mirth, merriment and bone-crushing hugs were rampant.

If you have never attended a back yard concert, I urge you to do so as quickly as humanly possible. The intimacy between performers and audience, when that invisible barrier breaks down and is eradicated forever, is a moment that I cherish most in a small setting. A small back yard, walled by trees and under a blue sky ceiling, is arguably the perfect setting in which to forge new friendships, bond over food and drink, and celebrate the love of live music.

Stay tuned for photos and videos.
Posted by Barbara Bruederlin at 2:31 pm

Sounds like house concert 2 was a great success! Wish I could have been there.

Why can't we all have neighbours like you Barbara? What an absolutely magical summer's evening that surely was; And what a great tradition you've started too! Perhaps a starlight show sometime.

As for round 3... Woodpigeon must be getting close to the next release. Even better, could Kittens and Whiskey be far off?

Well done my friend and thanks for being so hospitable to my fellow Londoners.

It was grand, Al, and I so wish you could have been here too. Round 3? So many possibilities, I wonder how Radiohead would feel about sleeping in my basement?

Well, Sean, if I recall correctly, you were pretty instrumental in kick-starting this little tradition. So pats on the back all round.
It's Kittens and Moonshine, my dear, but I am almost mentally ready to take on that challenge.

There was a lot of magic floating about, Mr Anchovy. I think it was in the wine.

I am very envious of anyone who can pull off a concert in the comfort of their own home. Nice.

Perfect review of a perfect evening.

How fun. I'm so jealous!

Remi, how nice to see you back on the blogosphere! It's been ages. You are right, a concert in the comfort of your own home is a completely luxurious thing! I was tempted to wear my pyjamas!

Made all the more perfect by the perfect guests, Susan!

Some day, you must make the trek up here for one of these, Lesley.

It was truly special, Kelly. You would have enjoyed it.

Pics or it didn't happen.
But no, seriously, I'm getting warm fuzzies just reading this. Can't wait for the videos!

I must do one of these. I shall write you for details on getting started.

You really should have a house concert, Leazwell! I have a feeling your home would be ideal. So much fun!

Oh, how I wish I could have been there! It sounds just magical. Next time!

You really should have been there, WC. Counting on it next time!