everything you ever wanted to know about pooping in space 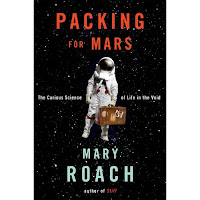 She's done it again. Mary Roach, author of such delightfully compelling treatises as Bonk, Spook, and my all-time favourite science book, Stiff, has once again captured my imagination in her most recent book, Packing for Mars. As has become standard practice, Mary Roach manages to answer all my questions, including some I didn't even know I had, this time about life in zero gravity.

In Packing for Mars, Roach sits in on the grueling and often perplexing astronaut selection process at the Japan Aerospace Exploration Agency, chronicles odd and little known aspects of the historical space race, and speculates on some challenges of life in space which had never previously occurred to me.

Oh sure, everybody has thought about pooping in space (even though the particular challenges of fecal popcorning, free-floating escapees, and fecal dust blowback are matters that have eluded even my 10-year-old boy imagination), but NASA has done more than just think about it and giggle. They actually employ engineers who study the degree of curl that occurs without gravity to pull the feces straight as it is being emitted. This is crucial information to have when designing aerospace waste collections systems, in order to prevent the curlage from blocking the top of the narrow evacuation tube. True story.

And if it were not for Mary Roach, I would never have known about this.

There is actually much more to Packing for Mars than poop stories. While researching this book, Roach traveled to Devon Island to participate in Mars simulation studies, took a parabolic flight on a Vomit Comet, visited bone-loss study volunteers lying prone for three months at a time, and kept filtered urine in her fridge for drinking purposes, much to the dismay of her long-suffering husband, Ed.

With fascinating topics such as the development of astronaut food, speculations about the challenges of sex and childbirth in zero gravity, and a compelling look at historical space hygiene (or lack thereof) studies, this book holds something captivating for everyone. You have to read Packing for Mars.
Posted by Barbara Bruederlin at 2:11 pm

I'm sure this is a fun read. I just finished Spook, and even though I've read many books on spiritualism I found it original and totally entertaining.

There is no denying that Mary Roach can make any topic into the most fascinating thing you have ever read, SME. She's got a gift.

There is no shame in being fascinated by zero gravity pooping, Mr Anchovy.

AWESOME. *trundles off to amazon*

I've been meaning to pick up one of her books for a while now. This sounds like a fun read!

My book club is reading Bonk in January. I may jump into it sooner.

this was the book I picked up for camping last weekend. a certain sneaky woman grabbed it before me and I haven't had a chance to read it yet.

It's worth the trip, first Karen!

She has such a great sense of humour, Karen. I find myself snorting repeatedly while reading her books.

Sounds like you have a fun book club, Leazwell! Do jump right in, anytime is a good time for a Mary Roach book!

That's just plain underhanded, Kelly, stealing someone's camping book. Thanks for the recommendation, I shall add Freakonomics to my list.

I saw her on Discovery talking about Bonk. That's next on my list. I loved Stiff.

This sounds like a fun read! I actually saw Spook selling at half price at a uni book fair once, and for some reason decided not to add it to my list of purchases. Needless to say, I still regret it.

Lucky you, Al! I would love to see her on a panel of judges sometime. Or at my dinner table.

Such a shame, BAP. One must sometimes listen to those little voices telling you to spend your hard earned money.