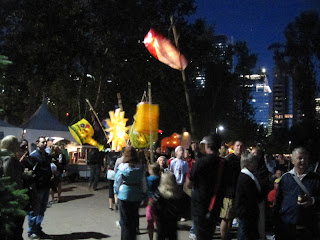 As a newly-minted coordinator in the Music and Merch tent, I knew that Sunday was going to be the day that for me involved more selling of than partaking in music. Naturally, it was also the day of my Lightning Dust interview. If you are going to be busy, you might as well be really busy.
Still I did manage a few minutes in a shady grove to catch my breath and catch up with the Spousal Unit for a bit of Jimmie Dale Gilmore magic.
With the sun and the climbing mercury came the crowds. Sales in the record tent were brisk, as supplies of CDs and albums by crowd favourites began drying up as rapidly as the previously swampy ground. We had a full roster for autograph sessions, some of the musicians like Reverend Peyton's Big Damn Band coming back for multiple sittings. This was great news for some people, like my record tent buddy from two years previous, whom I encountered by chance earlier in the day. He confided to me that, this year, he was in love with the band's washboard player. We call her Babs, he told me, a conspiratorial grin spreading across his face, short for Bad-Assed Bitch.
Joshua Wells and Amber Webber from Lightning Dust proved to be charming and scintillating interview subjects. You will need to read my article coming out in the September-October issue of BC Musician Magazine in order to learn what they divulged to me, but I will tell you that Amber called Buffy Sainte-Marie a babe. I will also tell you that some of the real reporters wandering the Calgary Folk Festival site were absolutely cut-throat characters who think nothing of stealing the chairs that somebody else assembled in a shady spot by the river for their own upcoming interview. Never trust a reporter.
Following the interview, I miraculously connected with both the Spousal Unit and the Resident Offspring at the most jam-packed stage I have ever attended. And by jam-packed I am referring to the audience numbers, although the stage was rather full to bursting as well, holding all the inhabitants of Mighty Popo and Reverend Peyton's Big Damn Band, as well as Matt Anderson and Harrison Kennedy.
With a full evening of finalizing artists' contracts, counting and packing merchandise, and striking down the record tent ahead of me, my final show of the night occurred while broad daylight still graced the island. As the Resident Offspring, her buddy and I lounged back with our gelatos and watched the thousands of babies crawl around in the grass (including the toddlers from Thursday's toddler rollup whom we kept seeing everywhere all weekend), we bopped our heads to the groove beat laid down by Yohimbe Brothers, Inhabitants, Jim Moray, and MINOTAURS.
I regret having missed performances by Couer de Pirate (although I did catch a smidgeon of her and Chic Gamine at a workshop I paused for the day before), Blind Pilot, Ernest Ranglin, and Buffy Sainte-Marie. We did manage to hear Buffy Sainte-Marie from the record tent, and I will you that the degree with which she rocks absolutely belies her seventy years.
But there was part of one more performance and one more moment of magic for me before the final strains of music faded out over the river. That was the moment when all the coordinators and festival organizers were called to climb the boards of the main stage for the weekend finale. From inside the artists' lounge area, where we waited to take the stage, we watched Wayne Petti from Cuff the Duke perform the final show of the weekend with Blue Rodeo.
And then we all clamoured onto the stage - dirty, exhausted, but very satisfied - smiling and waving to the audience as they rolled up their tarps and folded up their chairs for the final time. Swaying from side to side, hugging and laughing and reveling in the koombawya of the moment, we promised to buy each other refreshments at the final after-party of the Calgary Folk Festival. But of course you know, what happens at after-party stays at after-party.
Posted by Barbara Bruederlin at 2:33 pm

That sounds incredibly jammed packed for one day - I can't imagine a full weekend. Are you full recovered now? Guessing it would take a few days. Looking forward to reading your article in BC Musician!

It seems to take a little longer to recover with each passing year, Al. Eventually I will just stay in bed all year and only come out for folk fest.
I'll do my best to write a page-turner!