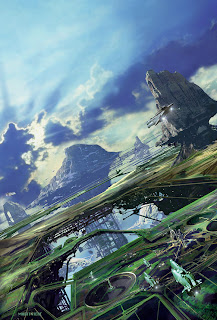 A bad time for my battered and duct-taped camera to finally fizzle out and die. You would be impressed by the staggering pile of deadfall in the backyard. The zombie lair (or at least the outer environs) is undergoing a much needed face-lift.
Not having the resources to hire someone who actually knows what they are doing, I am tackling this long neglected project myself. This may yet prove ill-advised, but so far (aside from the self-induced aches and pains), the results are starting to look like the vision I had for the place.
At first we rather liked the wild look along the back fence, especially since it takes about 100 years for a tree to grow around these parts. The privacy afforded by the wild abandon of spruce, lilac and some other nice smelling flowering tree was quite lovely.
But the inevitable competition led to eventual deaths. The lawn was first, or at least first noticed. The ensuing clouds of dust that billowed up every time I ran the lawnmower over the area of sparse lawn closest to the stand of spruce is what inspired me to define the boundary between lawn and tree with a pleasingly shaped edging and the removal of turf beneath the trees.
Of course, this caused the dominoes to start tumbling.
It wasn't until I was wedged into the tree line, hoe in hand, removing turf, that I noticed all the dead branches. Many of them were deep within the hedge or were confined to the inner branches of the spruce, so not immediately noticeable, but all I could think of, besides how shitty it looked, was that one errant spark would send the whole back yard up in a blazing conflagration. Out came the clippers and the long-handled branch cutters.
Now that there is a massive pile of dead branches occupying most of the back yard, waiting for me to find a method of disposal, I have no choice but to return to the painstaking, painful, and painfully boring task of removing the rest of that turf.
And if I haven't learned my lesson by the time I finish the backyard, I also have plans for the front.
When was the last time one of your projects got out of control?
Posted by Barbara Bruederlin at 6:30 am

Email ThisBlogThis!Share to TwitterShare to FacebookShare to Pinterest
Labels: may live to regret this

Shame that the camera broke, I'd love to see all your hard work! Hopefully you're able to find some method of disposal. That was one of the issues we had with the renovation - getting the old stuff out. Do you have curbside recycling/compost pickup?

I haven't had a home project get out of hand in a while, but I decided to wash the walls and woodwork at work and that resulted in removing more than I imagined from the space. Looks good now, but I'm still taking Aleve and recovering. ;)

Make sure you get a new camera for Communique!

Good for you for tackling this. It would not have been my cup of tea.

I can fully appreciate this scenario because it always seems that when I get an idea to change one thing it invariably creates a domino effect - the results are generally worth it though.

We have curbside recycling, but not composting, Al. My own composter would need to be 100 times its current size if I were to compost all this, so I have no choice but to trash it, which I do feel guilt over. Fortunately we now have the black bins, which are massive.
Washing walls is definitely out of control, in my opinion!

A new camera (perhaps with a phone attached) is on my wish list, WC!
Very smart of you to abandon projects before they reach the point of no return. I never know when to quit apparently.

Thanks for the encouragement, Kathy. I did finish the turf removal today (after changing my technique), and I think you are right, it will be worthwhile.

I always have more projects on the go than I can reasonably handle, so there's always something out of control.

it will be very satisfying when you are all done.

I generally manage to keep most of my big projects in the planning stage, Mr Anchovy, so the disarray is not immediately evident to the world outside my head.

It actually looks much improved already, Kelly, and the aches and pains are starting to abate.