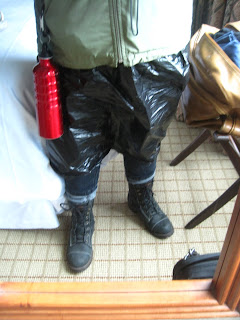 Friday's cold driving rain which pelted those die-hard folk festers, who turned out in impressive numbers, called for wardrobe considerations beyond gauzy skirts, man-pris and flip-flops. The Resident Offspring pulled together a Derelicte hippie-chic ensemble that proved to be ingenious for the day's decidedly unsummery foray to Prince's Island Park.
After holing up in the hotel to recover from a hair-raising commute through torrential deluges amongst hydro-planing tractor trailers, we wandered over to the island during a letup in the rain to catch BRAIDS' side-stage concert. Despite a professed difficulty in sound quality, the bright and phosphorescent performance of the Polaris short-listed former local darlings proved to be a glowing point in dark and soggy day.
Matt Anderson, the big man from New Brunswick with the even bigger voice, rocked the mainstage with his rollicking blues and his impressively intricate guitar licks. He didn't make the sun shine, but he made the rain a little less cold for a while.
Nanci Griffith was one of the classic folk performers whom I had been waiting to see, and although she has been in the industry for over 30 years, her voice remains as clear and pure as when she began. She kept apologizing for the rain, thanking us for staying, and wiping her nose with a kleenex that I wished she would share with the rest of us drippy-nosed people. Although her heart and her political leanings were in the right place, when the Resident Offspring pointed out that some of her social commentary songs came across as "wikipedia pages in song format", that was the final impression that I was left with.
I was chilled to the bone and soaked through four layers of clothing by the time Bonnie "Prince" Billy took to the stage with his theatrical presence and heartfelt honesty. The Spousal Unit had already given in to the chills and headed back to the hotel, as had many of the increasingly chilled festival-goers, but the Resident Offspring, in her uncanny salesmanship, persuaded me to stay. Let's go for a walk, mom, get some coffee, do a little dancing...
That was how we ended up crawling out from under our drenched tarp to find ourselves over at the twilight stage, where Yemen Blues were just completing a spirited and stirring set. Although encores are generally frowned upon at a festival setting, the rapturous crowd begged for and received, another ten minutes of funky Mid-Eastern soul. The cloak of invisibility that comes with having two damp hoodies pulled over my head gave me the license to dance like I was alone in the kitchen instead of squelching around in the mud with a few hundred other half-drowned souls. And then the rain stopped for a while. It was the first magical moment of this year's folk festival, and the first time that day that I felt warm.
As the dusk settled into a cold wet night, Patrick Watson lit up the mainstage with his ethereal brand of cabaret pop, piano driven and fueled by his soaring falsetto that rang out into the open heavens. Some guy with twinkle lights on his jacket danced his way through the crowd during Watson's set and imparted some much needed warmth and light upon the night.
By the time the eclectic Herbalizer blasted onto the stage with their funk, jazz, hip-hop melange, I was slipping into the final stages of hypothermia, so we shuddered to the beat for a few songs and then squelched our way back to the hotel, to a hot bath and piles of thick blankets.
We patted each other on the back for what felt like a major accomplishment and an initiation into the Folkie Bad-Ass Hall of Fame. Anybody can folk fest in sunny warm weather, after all; it takes sterner stuff to keep dancing when your curry is floating in rain puddles on your dinner plate and you can see your breath.
coming up: day of mud and ecstasy.
Posted by Barbara Bruederlin at 11:18 am

Email ThisBlogThis!Share to TwitterShare to FacebookShare to Pinterest
Labels: calgary folk festival, photo credit to the Resident Offspring, what doesn't kill us

You did well, braving the weather!

I'm going to be bragging about this for decades, Mr Anchovy.

I am pleased that despite the meterological adversities you did manage Folk Fest success. It takes a hearty soul to stand in the rain and applaud the humble entertainers. Kudos to the Resident Offspring on the utilitarian fashion sense. She really should market that look to the folks at Glastonbury. I think she's really on to something.

Thanks for being such a "folking trooper". Your tales are priceless.

Well done! You would think you were from Manitoba braving those elements like that.

Nice outfit - I am sure that RL will be contacting her for advice sometime soon for help with a new line of Folk Fest wear...lol

I am putting "folking trooper" on my resume, Sean. In fact, I may just get a t-shirt made up.
I will definitely suggest to the RO that she launch a folkie-Derelicte clothing line to be marketed exclusively to Glastonbury patrons.

It must be my Manitoba upbringing coming to the forefront, Kathy, except for the lack of mosquitoes.

What is this cold weather you speak of??

We have been storing it here for the rest of the continent, until you need it again, Beckeye. You're welcome.