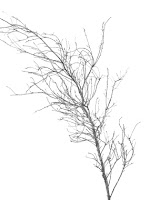 Operation Dead Hedge has commenced and, true to form, I forgot to take any photos for the before and after shots. Not until I stood catching my breath in front of a massive pile of dead branches, holding the last mud-encrusted root ball in my hand, did it occur to me that I had missed the opportunity.
I may regret missing the photo op, but I do not regret moving forward with the plans, despite the fact that, also true to form, the project has turned me into a human Rube Goldberg machine. It's what happens when you get stabbed with a lilac branch while laying slate. When taking the hedge pruners to the offending (and also dead) branch, it's next to impossible to stop at pruning just one branch. And you thought eating just one potato chip was hard.
The lilac looks better now, but that pile of dead branches has gone from merely massive to gargantuan.
I decided against using up the old floor tiles to augment the slate slabs for this project, and opted for much larger, sturdier, and one thousandfold heavier sidewalk blocks. That waterbed bench is going to be heavy and needs a solid base on which to reside.
The Spousal Unit has offered to build the waterbed bench for me, but, not content with hand gestures and explanations like about yay long and held up by some stacks of wood or something, he insists that I provide him with some construction plans. My haphazard scrawls on the back of a grocery list will not suffice.
You don't happen to have any blueprints for a simple backless garden bench on you, do you?
Posted by Barbara Bruederlin at 3:12 pm

Email ThisBlogThis!Share to TwitterShare to FacebookShare to Pinterest
Labels: home repair for the homelessly inept

We have a saying in my family: It ain't pruned 'til it's a stump. So I get you. Also...no plans here. Sorry!

I'm always forgetting to take the before shots. Thank-you for reminding me I need to do that this before before our renovation at the museum. Glad to here operation dead hedge was a success. Is garage painting next?

I think I must be your long-lost cousin or something, Flannery, because that saying makes perfect sense to me.

Thanks for the reminder in return, Al. Yes, I definitely need to get to Operation Peeling Garage Door next, while it's prime painting season. Looking forward to seeing the museum renos!

You need to check with your brother - he is the undisputed whiz at this bench designing stuff.

Tell him to get over here and build me a bench, Kathy. In return I will boil him up all the pasta he can eat.