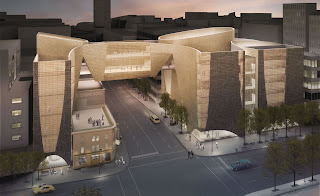 Evoking symbols of the west - grain elevators that once dotted the prairies, hoodoos that rise from the badlands - the National Music Centre, scheduled to open in 2014, will be an impressive and unconventional gateway to Calgary's East Village that is certain to generate controversy. Judging from the decidedly mixed reaction that unconventional designs such as the new Peace Bridge have previously generated amongst Calgarians, there are bound to be more than a hatful of haters hating on the National Music Centre building. Personally, I think it is exactly the sort of grand and imaginative design that is needed to house the grand scope of its vision.
Cantos Music Foundation CEO Andrew Mosker and architect Brad Cloepfil unveiled the striking design at a packed soiree at the Uptown Theatre Wednesday night. A sizable contingent of the city's music, culture, and architecture lovers milled about the Art Deco foyer of the historic theatre, noshing on deli platters and chatting above the black tee-shirted band before being ushered into the theatre proper for a break-neck paced, albeit good-natured, slide show. Despite having to forego the Wild Nothing/Braids concert on the opening night of Sled Island and despite having been given a taste of the plans at an information session at Cantos Music Foundation a month ago, I knew I also had to be present for the formal unveiling.
The National Music Centre will house performance spaces, artist in residence studios, recording studios, and exhibition spaces. The condemned King Edward hotel, which is both a historical landmark and an important piece of the city's musical history, will be restored and incorporated into the structure as a club, very much in keeping with its longtime role as a blues venue. During the design phase, acoustic engineers planned movable walls within the towers and vessels of the structure to allow for performances to be closed off into smaller spaces or to be opened to allow music to fill the entire National Music Centre.
Most importantly, the NMC will provide a physical home for Canada's musical legacy, a legacy that until now has had to reside in the hearts and the memory banks of lovers of Canadian music. I cannot be more proud that this is happening in my Calgary. 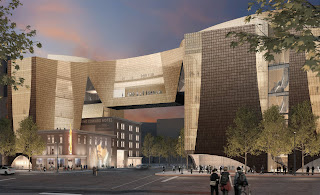 Posted by Barbara Bruederlin at 3:38 pm

But will heavy metal be welcome there? That is the question!

Of course it will, WC! This is a judgment-free zone.

I'm reminded of the controversy over the Rooms, Newfoundland's Art Gallery and Museum when it was unveiled, forever altering St. John's cityscape. In my opinion it's awesome, but when buildings are this large and different, there's no way to avoid strong feelings on both sides.

That's very true, John, but while there is no shortage of huge buildings in Calgary, most of them feature fairly traditional design. But at least it's not the exploding mushroom design that the music museum in Seattle features.