gold stars all around 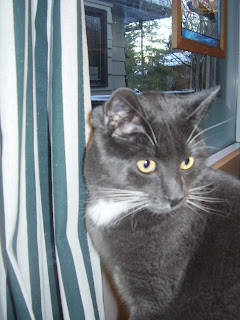 She became pretty distressed as we plopped her into the cat carrier, and she vocalized loudly all the way to the vet's and until she was let out of her carrier in the vet's examining room. In fact she was so loud while she was being weighed at the front desk that the woman who was waiting for her dog started to mock her, echoing the SRK's every meow.
I was ready to clock her up the side of the head. The mocking woman, that is, not my poor brave Slightly Retarded Kitty.
But even though she was obviously distressed by her visit to the vet and even though she likely thought that, for some reason, we were going to abandon her at the the humane society, the SRK never once lost her good nature.
The vet, who well remembered Sputnik - the SRK's predecessor - and the extreme protection measures (chain mail gloves, thick blankets) that were required to protect the veterinarian staff from Sputnik's rage, was delighted. With a wide smile and while rubbing her hand fondly over the SRK's thick glossy coat, she declared the Slightly Retarded Kitty to have received an A+ in her examination.
She's put a little bit of girth onto her womanly belly over the winter, but I think a switch to some less calorically dense food and a little more outside time, she will be squeezing back into her bikini before summer.
I wish my own annual examinations were that rewarding.
Posted by Barbara Bruederlin at 6:46 pm

Exactly, Leazwell. She makes me smile every day.

Thankfully doctor's appointments are usually fairly inert, Al, but I have yet to receive an A+ and a belly rub.

Hooray to SRK Ramona for a clean bill of health. Her American twin sister Ippie sends her best.

What an evil woman at the vet's! I would have clocked her for sure! That is not cool at all.

Glad little Ramona has got a good bill of health and all went well in the end. Looking forward to some bikini shots of her this summer for sure. :)

I'm pleased you caught that, Moxie. I have a weakness for using lyrics as titles, and was glad to have an opportunity to use some of Emma's.
I'll bet that Ippie and Ramona both enjoy having a doppelcat across the border!

I'll bet Ramona would not even struggle too much (although she would complain) if we were to try to fit her into a bikini, WC, which of course gets me to thinking...
To be fair, I think that woman assumed she was talking to Ramona, but we all found it annoying.

I'm taking my dog to the vet for his first check up next week. I have a feeling he'll get an A+ too.

SRK is a real trooper! I would be half tempted to locate the address of the nefarious kitty mocker and leave some well placed feline nuggets on the front porch.

Verification word = "soylo" - which we all know is a bi-product of soylent green, and trust me, you don't want to know what it is made of

jake the jerk dog had his check up last week. Being a senior dog they wanted to do blood work and have a sample of his pee. I followed him outside for his first morning pee and held a container under him. He is in fabulous shape and his teeth are white and his coat is shiney. I'm happy but also sad that at age 10 I realize that as a big dog he doesn't have more than 4 or 5 years left.

Of course Finn will get an A+, Beckeye! All he needs to do is flash his charming smile with the rakish scar and the vet will be smitten.

It's kittens! Soylo is kittens, Westcoast!
I found it a little insensitive of that woman to be mocking my cat, when she had a purse dog. Sheesh.

You know you love your dog when you help him with his pee sample, Kelly.
Jake may be 10, but he's obviously in fine shape. I have the feeling his senior years will be full of health and vigour.

She is lovely! It sounds like your vet likes cats -- this is a good thing. Sometimes when you use a vet who serves both canines & felines, you get the distinct impression that they take care of cats just 'cause they have to.

May the Spirit of Sputnik return to wreak revenge on that mean lady who mocked your baby!

I am so lucky with my vet, Vol-E. She is a genuinely lovely caring person. She has a show dog, so I assume that she is a dog person at heart, but she loves all her patients. She was even laughing about how much Sputnik used to hate her!