the taste of copper in your mouth 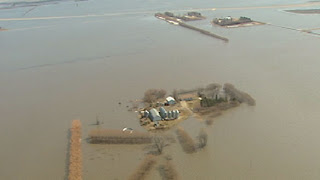 I rolled pennies during the flood of 97.
Having grown up in Winnipeg, I was not unfamiliar with spring floods. The annual cresting of the Red and Assiniboine rivers were expected rites of spring. Sandbagging, the opening of the floodway, drives to Lockport to see the ice break up on the river were just another season of the year, tucked in between the ice ruts of winter and the mosquito bites of summer.
In the spring of 97, I was living in Ontario, watching the news reports from the prairies grow increasingly grim. The flood of the century, they were calling it. And I couldn't even help fill sandbags.
I spent a lot of time volunteering at the neighbourhood school, where the Resident Offspring was in senior kindergarten. I can raise a little money for flood relief, I thought, and give the kids an opportunity to practice a little altruism. I can ask them to bring in pennies from their piggy banks. I don't mind rolling a few pennies.
Famous last words, these turned out to be.
I can't remember how many days I sat in the school library with piles of brown paper penny wrappers littering the table in front of me, inwardly groaning as yet another student brought in the offerings from their classroom. We ended up raising $350 for flood relief, which was then matched by the Spousal Unit's employer. I haven't rolled pennies since.
Of course the flood of the century is now being surpassed by this year's Red Sea, as they are calling it. And my heart aches for the place that raised me. It's not just the rivers this year - the Red, the Assiniboine, the Souris - it's also overland flooding from the massive snow melt. Tracking the flooding is akin to watching a slowly unfolding horror film from behind spread fingers. You know what's coming and you can't do a thing about it, except wait.
Somehow I don't think that pennies are going to cut it this time.
Posted by Barbara Bruederlin at 2:58 pm

I am watching the news with horror as Winnipeg, Moose Jaw, Radville, the Quapelle Valley and Crooked Lake are all being hit hard by flooding. So many places with an integral link to my life.

It's frightening to see. I have lots of change that refuses to be rolled by me. Are you sure you wouldn't like to help me out?

The flooding is so widespread this year, Toccata. It's the return of Lake Agassiz, next we'll be seeing dinosaurs.

You have some very strong-willed coins around your place, Dale. Have you tried arm-wrestling them into submission?

Seeing photos like that make me feel so helpless.

The only real flooding I've ever encountered was when I was up in Northern BC. At the start of summer there would be flooding as the snow would melt. But I don't think anything ever as bad and what's going on in the prairies.

Flooding in the mountains would lead to a very unique situation, I imagine, Al. The soil type in southern Manitoba also contributes to the problem; there is no drainage with that heavy clay. Also a contributing factor to Winnipeg's legendary mosquito problem. Yer geography lesson of the day...

I know, and this is only adding to my mistrust of geography, Jen.

My hearts and prayers go out to the people in the water-torn place of your origin. Watching the plight of the Japanese after the recent quake, I was struck by the ever-occuring thought that we none of us should take our security, safety and comfort for granted. Bless us all, every one.

That is so true, Phlegmmy. It really makes you appreciate what you have.