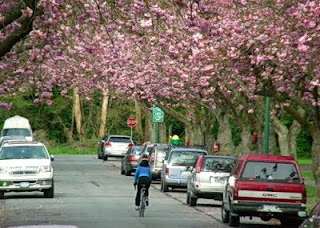 As usual, the OFKAR summed it up perfectly. Vancouver looks photoshopped.
The intensity of the colours in this city really are quite surreal and almost startling, especially when you have just flown in from Calgary, where you spent an hour sitting on the tarmac waiting for the plane to be de-iced because there was a snow storm raging. Vancouver is always a happy surprise but even more so under those circumstances.
Also a happy surprise was the level of preparedness that the OFKAR demonstrated in moving out of her rez room. I was expecting to walk onto the set of Hoarders, like I did last year, but instead found things obviously in some disarray, but really quite manageable.
It was really quite bittersweet to observe the OFKAR bidding farewell to the jolly band of adventurers with whom she became so tight this school year. I was glad that I had a chance to meet a handful of them, those names and faces that had become familiar to me over the past months. Very sweet kids they are, who joined us for a final coffee outside the campus Starbucks, and who didn't even mind succumbing to a hug from someone's mom.
The rest of this whirlwind trip has been a blur of activity. Lots of sushi feeds to tide us over the summer. A quick trip to Granville Island where I almost talked myself into buying a hammock. Meeting a dear friend downtown, which culminated in colourful drinks at a Japanese restaurant where the wait staff group chanted loudly at us and our waiter resembled an Asian Thom Yorke, more sushi next door, and surprise first-time meeting with another blog friend. And walking. As always, lots and lots of walking.
And yet, so much I didn't get to do, so many friends I didn't have a chance to see this time.
One more cup of coffee and I will say goodbye, see you in the fall to Dave and Michael at the front desk. We'll pack the suitcases into the trunk, ask each other for the hundredth time why it is we are going back to Calgary, and head to the airport.
Posted by Barbara Bruederlin at 8:19 am

Email ThisBlogThis!Share to TwitterShare to FacebookShare to Pinterest
Labels: see you soon Vancouver

I miss you already! So glad we were able to at least have dinner though. Apologies for having to leave hastily - but you would have appreciated our seats. Safe travels back to Calgary, and I'll start planning our next meal here - this time I'll write down the directions. ;)

I helped a friend move her son out of his dorm last weekend. OMG what a mess. The night before we went to move him he called asking if he should just throw out the cutlery. When his mom told him of course not he said, "Um, I'm not sure this stuff will clean!" Yikes. It was hilarious to see what all he had acquired through the year. Of course there was fake vomit because every dorm room must have fake vomit.

Have a great road trip back to Calgary.

p.s. I am still have nightmares over your short story.

I miss you too, Al! And I miss Vancouver.
I'm so glad that you got great seats; dinner was so much fun and very yummy, and I really didn't need dessert...

I will have to clue the Offspring into the need for fake vomit in her dorm room, Toccata. She was shockingly in the dark about this rule. I don't believe we had to throw out any cutlery either...
I'm so glad I could freak you out a little with my fiction. Still want to be my friend?

Nice little slice of life, there. It's very refreshing and rejuvenative to see different places, sometimes. Especially the ones wot look photoshopped.

I always love going to Vancouver, Phlegmmy, especially at this time of year when it's gorgeous there and less so here.

I haven't been over to Vancouver except changing flights at the airport for a couple years. Anytime I go there I enjoy it but find the traffic very agitating

Once I am ensconced at the hotel, I generally walk most places in Vancouver, Kelly. It's a beautifully walkable city, if you don't mind having to cross a bridge every ten feet.