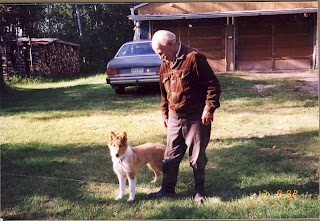 This is one of my favourite pictures of him. I keep it in my office, book-ending the little writing desk with the other photo, the one of my mother. Strange too that the writing desk itself came from the Spousal Unit's parents. There's a lot of history tetrised into those few square feet.
In the picture, before the stroke, before the nursing home, he is in his element, on his property with his dog. Rubber boots to traverse the land. Good for stepping over deadfall and striding over prairie grasses. A very purposeful stride.
He was always close to the land, always had a regard for hard work, for making do with what was at hand. Self-sufficient, self-contained. Always armed with a massive vegetable garden, he composted when the practice still raised eyebrows, collected rainwater before the era of the rain barrel, reused discarded bits and pieces long before they coined the word recycle.
He's been gone for ten years now, ten years ago today. It was only after his death that I really looked at what he left behind and began to appreciate, not just the work ethic in him, because he always seemed to be working, but the creativity that he demonstrated in the things he left behind. Things like this woodcut stamp that he made. He always did favour the oak tree. At his funeral, we all agreed that Papa would be very disappointed that he didn't hold on until April Fool's Day, because he would have considered that to be the ultimate joke. I still believe that, to this day.

Email ThisBlogThis!Share to TwitterShare to FacebookShare to Pinterest
Labels: passages

What a wonderful photo of your Dad, Barb. He was a wonderful, unique, intelligent person - I thought the world of him except when he cheated at Scrabble, then I had to think about it.

A big hug for you.

He was certainly a force of nature, Kathy. He always enjoyed playing Scrabble with you, too; you seemed tolerate his cheating more than the rest of us did.

Thank you, Leazwell, I'm pretty proud to be his daughter.

What a beautiful tribute. He must have been a hell of a man.

On another note, I come with hat in hand. I like to ask you for a favor. You always seem to enjoy the little tales I pen over at my place and I was wondering if maybe you'd like to give it a shot too. I belong to a group of bloggers that write for Flash Fiction Friday. It's a fun little once a week project and it really drums up a lot of readership for your blog. Well, I'm hosting this week and I'm fishing for some new talent to join in and I thought of you first dear. Swing by and take a look, if it isn't up your street, maybe you have a bloggy friend you could recomend it to.

Here is the link: http://www.flashfictionfriday.com/

That is a great photo. What a wonderful dad.

A lovely tribute, Barb. I couldn't help but chuckle at the thought of holding out until April Fools. He must have had a great sense of humour. I love that wood craved stamp too, really something.

I'm pretty sure I actually belong to the facebook group, Doc, but I just never got around to submitting myself for initiation yet. Of course I will get involved! I rarely write fiction and this will be the ideal way to force myself to. Besides how could I resist such a charming request?

I love that photo too, Lesley, it really sums him up in his natural setting.

He had a bit of a bizarre sense of humour, Al, one that would make you shake your head. But he had some mad wood carving skills.

A wonderful remembrance and the woodcut stamp is a treasure to be sure. Can I also say that your sentence "There's a lot of history tetrised into those few square feet." made me really happy?

Thank you, Dale, I try to use the word tetris as a verb at every opportunity.

What a lovely portrait you paint of one who was obviously a lovely gentleman, always true to his infallible inner voice. May we all honor his example by being true to our own selves. Bless him and all who were honored to know him.