here they come, the young thousands 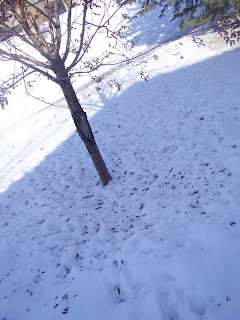 When the air cleared, the ground was a silent battlefield, the snow so stained with red that it seemed a massacre had most certainly desecrated the earth. Not a single berry remained.
The Slightly Retarded Kitty had watched the horde of marauding birds from behind the safety of glass as they returned again and again in a massive circling cloud to descend upon the mountain ash. She cackled in excitement as eighty or more birds shook the branches time and again, and tore at the berries. Then they would lift up into the sky in a single entity, swooping en masse to the next yard and the next street, only to return moments later for another round. A round for the house, Charlie, on me. It was a massive pub crawl of wintering birds, freshmen on a Friday night, as sick as the rest of us of the endless snow and cold.
When the SRK could stand it no longer, being separated from all this prey, these playthings, I opened the front door. As she slunk under the Muskoka chair on the front porch, the winged horde lifted from the tree for the final time, the air filling with a rush of flapping drunken wings. It was near deafening, the roar of feathers. You could all but feel the tsunami of displaced air as they flapped in unison and ascended.
Did we learn nothing from Hitchcock?
Posted by Barbara Bruederlin at 4:22 pm

Email ThisBlogThis!Share to TwitterShare to FacebookShare to Pinterest
Labels: bat-shit crazy birds, it's been a long winter

This made me smile. Thanks, I needed it! Also, the word marauding just doesn't get used enough. Well done, you!

The Slightly Retarded Kitty and I are happy that we were able to help, even a little bit, Al. And the SRK has been on high alert ever since.

hat would have been quite a sight

On Saturday evening, it was pouring rain when we entered Massey Hall for the concert, but a snow storm when we emerged. That's just not right. Somebody's got to talk to ol' Ma Nature. She's cranky these days, and unpredictable. Maybe if we give her a wee snifter of brandy, she'll settle down and let us ease into spring.

It was awe-inspiring, Kelly, but the sound of those wings was even more impressive than the sight.

I've heard about your crazy weather this weekend, Mr Anchovy! At least ours has been consistent...

I find myself more and more creeped out by birds as I get older. This only reconfirms that feeling.

I don't trust them, Lesley, which proves to me that you are only getting wiser.