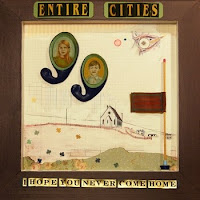 I Hope You Never Come Home - Entire Cities
The raucous psychedelic cow-punk party band sound of Entire Cities has matured into something a little more restrained on their second album, I Hope You Never Come Home. Ultimately this release feels a bit more mature than the band's debut album, Deep River, and that's only right and proper.
I Hope You Never Come Home is still filled with those signature change-ups in tempo and in melody, and the vocals are still dominated by the iconic booming voice of frontman, Simon Borer. But there's a shift toward a more subtle sound. Those shouting choruses that dominated the earlier album, although present, tend to eventually morph into a more restrained group-sing dynamic. The unapologetic barn-yard hollering has moved indoors and has been replaced by a slightly demented choral group.
Despite the more subtle sound, Entire Cities has managed to maintain the exuberant instrumentation for which they have become known. The album is still filled with breakneck rushes of recklessness (A Closed Hand) and the big flourishes that characterize their established party band sound, but added to the mix is a sweet boy-girl duet (Oh Dear Oh Dear Oh Dear), touches of nostalgic Canadiana with a soupcon of the big band sound (A Coat of Loup Garou), and a highly satisfying poetic spirit that runs throughout the entire album.
The final track, Predator Song, is particularly bittersweet, a beautifully restrained summation of the sensibilities that have come before and those that identify Entire Cities in their present guise. The gasp of oh my god and the burst of surprised laughter that follows the final notes somehow encapsulates the entire spirit of this album. A spirit of discovery and surprise.
I Hope You Never Come Home, ironically, feels like home.
entirecities
Posted by Barbara Bruederlin at 4:17 pm

The phrase "psychedelic cow-punk party band sound" peaks my curiosity. Never heard of this band before, but I will look into them now. Thanks!

They're a fun band, Al, and I understand they throw quite a concert.

This is great Barbara! You've certainly piqued my interest with this release. The artwork alone makes this one a must own for me.

I noticed Ruhee and the band are playing in Windsor tonight... Sure hope they play a little closer to home. After your apt description I'm really eager to see them now.

Congrats on the No Depression feature review too. Hope this translates to some more sales for the band.

I'm still waiting for them to play this end of the country, Sean. It's only another few thousand kms, I don't know what the problem is.
I hope the No Depression exposure brings some additional album buying boys to the Entire Cities yard as well!

Sean, we're trying to get some shows set up in London ... hopefully this spring will see it happen! We'd really have liked to get something the same weekend as Windsor but it didn't work out.

Thanks for this amazing review -- we are all really excited about it (and we're glad you liked the record so much, of course!).