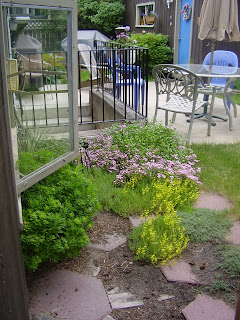 Days like this I am sorely tempted to track down the developer who built this house, who thought it was a great idea to transport a California design into a winter city, and punch him right in the throat.
Or perhaps just throw my snow shovel at his head.
Sure I like the idea of this community being built around a man-made lake, and all that the lake offers. It was a risky venture back in 1970, but it transformed this bald-ass semi-arid prairie into a treed haven, and it forged the way for many other lake communities in this city. I may not spend much time there anymore, but when the Offspring was wee, we spent most of our summer days at the community lake, me parked under a tree on my Hudson's Bay striped lawn chair, she splashing in the water with the neighbourhood kids and the rainbow trout.
The lake was a good idea. But the developer also imported a lot of housing designs when he returned from his California trip all those decades ago. One of those designs ended up forming our house.
It's a pain in the ass even in summer. The back door is below grade, so you have to go up four steps when you exit the back door in order to be at ground level. And if you are carrying food to the patio, you have to go down a flight of stairs from the kitchen, through the back door, then back up the stairs to get to the patio. I suffer patio door envy every summer.
Now imagine the winter scenario. I have to fling snow from the bottom of the stairwell over the railing, the top of which is a good six inches taller than me. And there's not all that much room to manoeuver around in that stairwell either, so you can't use a really long shovel. So a good portion of the flung snow comes drifting back down on top of my head.
The Spousal Unit, being a pig farmer from way back who knows his way around a shovel, generally offers to clear the back, while I look after the front and the city sidewalk. Thankfully we have no driveway, or we'd be forced to take in a border.
What would you change about the design of your home, if you could?
Posted by Barbara Bruederlin at 1:55 pm

My parents have a similar set-up in their house to get to the patio. Although we typically cut through the garage, and avoid the back steps, but our kitchen is on the second level of the house, so still stairs involved.

When we lived in Stratford we had a glorious patio and deck. My mom, suffers from patio door envy still, I believe.

I actually love the layout of my flat now, it's very open concept, which is nice. I'd just make the bathroom a little roomier, and not have the linen closet open up into the doorway of the bathroom. That's mainly for my accident prone self.

Oh, and screens on the windows. That would really help.

Your apartment layout does sound lovely, so much more spacious than your last place. But yes, screens are always a nice touch. Hopefully before spring...

I love the all the split levels in your house...And normally I'm not a huge split level fan.

As for my place...I could write a book. Currently ticking me off, apart from my low R rating (it's probably like R-2, if not lower), is the design of the new deck's roof. All the snow falls off the regular roof onto the new roof and then it all falls onto my front walk and front stairs, necessitating multiple shovellings. The new roof isn't very slide-y either, so often the snow builds up and up before it decides to fall, and then it's usually nice & icy so when it falls I have to manually life huge chunks of ice/compact snow. AND the snow is so high on either side of my walkway that I have to fling the snow higher and higher when I shovel it, which is getting harder to do because the snow bank is as tall as I am or more, and my shoulder tendonitis is acting up.

So. Sorry for the long-windedness, but I'm so sick of this I'm about to lose it.

I have seen photos of the ice sliding off the roof onto your steps, WC, and that is some serious ice buildup. That is definitely a design problem and with the amount of snow that you get, it's no wonder you are completely sick of the situation.

Never thought of having to shovel up a flight of stairs - no wonder you hate shovelling it! I think that would even defeat your brother as I recall him trying to mow grass in a little corner of our other house. I happened to mention that it would be a nice spot for a herb garden and that he wouldn't have to mow it anymore. It was done before nightfall - not even sure if I had time to shut my mouth. Small spaces sure are a challenge.

We just changed something recently about the design of our home. Stay tuned for photos...

Wow. That is just wrong. I don't know what I'd change about my house. Perhaps the snow drift on both the front and back doors right now? Ugh.

Of course! I should turn that back stairwell into a herb garden! I kid, of course, Kathy. A)nothing grows here and B) I've given up on the yard.

You tease, John! Bring on the photos.

It's been a brutal winter, hasn't it, Lesley? And it's particularly brutal when both sides of the house get snowed under. Want to borrow a shovel?