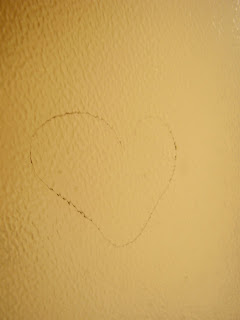 I took it as a good omen when I saw this hair stuck to the glass shower wall this morning. There was no rearranging or retouching involved, simply the random discarding of a mammalian filament into the universe. How could I not be cheered when entropy hands me a heart?
Very shortly I will be stepping out with my Marthas for the weekend. We'll be staying in town this time, at a hotel within hollering distance of my house, which may come in handy, you never know.
We've all vowed to keep the usual embarrassment of snacks to a mere chagrin, but between you and me and the bedpost, we know it wouldn't be a true Martha weekend if one of us (who shall remain nameless) did not bring along a 5 lb bag of brown sugar. This really happened!
Tonight is movie night. My suggestions of Exit Through the Gift Shop, 127 Hours, Biutiful, Barney's Version, The Kids are Alright, or Blue Valentine were all nixed, but fortunately we could all agree on Colin Firth ... I mean, The King's Speech.
After checking out rumours of warm cinnamon rolls in the hotel breakfast bar, we will head downtown tomorrow where we are taking in a matinee performance of She Has a Name, which will be followed by a panel discussion on human trafficking. A post-theatre wander through Kensington may be in the cards, followed by a trip to my new favourite local Indian restaurant, and then I am going to kick some Martha asses at pool.
On Sunday, I am really going to have to load up on the rumoured warm cinnamon rolls because we are going to the Home Show. Pray for me. I'll be the one fighting all the guys for the boyfriend chairs after I have witnessed all the mop demonstrations that I can stand.
What are you doing this weekend?
Have a lovely one, whatever your plans.
Posted by Barbara Bruederlin at 3:09 pm

Email ThisBlogThis!Share to TwitterShare to FacebookShare to Pinterest
Labels: the Marthas deux Calgary

I love brown sugar! I love the way the hard chunks break apart in my mouth. I think I would be too embarrassed to snack on it in front of my girlfriends, though.

Probably best to avoid Blue Valentine at a happy gathering but Exit Through The Gift Shop was enjoyable. Loved The King's Speech. It will keep you in good stead.

I read that Bietiful is a downer but Bardem shines. Sorry but I can't look at him without seeing him as that savage killer in No Country For Old Men. Ghastly character.

The snow kind of put a halt on my weekend, sadly. We should have cherry blossoms not this white fluffy stuff!

I hope you're enjoying your weekend with the Marthas. I'm curious as to what exactly a home show is.

I'm pretty sure I would be too, Lucy. Oddly enough this 5 lb bag of brown sugar was brought along as an ingredient for fruit dip or something. A slight matter of overkill.

The King's Speech was very good, wasn't it, Dale? I couldn't believe how compelling a film about speech therapy could be.

He will never shake off that role, Leazwell. He was certainly memorable in that!

I've heard you have been having unrelenting snow, Al! How nasty!
You are one of the fortunate ones, if you have never been to a home show. It's where all the flooring and cabinet manufacturers, as well as the sham wow dealers, hock their wares for endless crowds of shuffling people. Not my scene.

This weekend I ran a concession at a local curling club, grilling burgers & making sandwiches, etc. It was fun and I made some good cash, but I feel like I need a week to recover!

That does sound like fun, WC, but that would be exhausting to do all weekend.