a childhood in snow 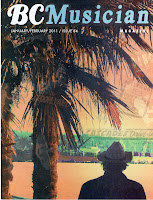 You have no idea how glad I am that the Spousal Unit did not suggest we attend the outdoor hockey game at McMahon stadium this afternoon. The Heritage Classic may have been a big deal amongst NHL fans but I had absolutely no desire to pay $250 each to sit outside on a metal bench in -25C windchill. That's why god made television sets.
And magazines.
It's a trifle on the late side, but the new issue of BC Musician Magazine is now available in record stores and coffee shops. I was curious about the real value of album reviews, so in a highly robust opinion poll, accurate within 3 percentage points 23 times out of 19, I queried a handful of musicians about their experiences with album reviews.
You can read their collective thoughts in my article, Critiquing the Hype Machine. I wouldn't lie to you.
Posted by Barbara Bruederlin at 7:42 pm

For a second there I thought you were critiquing the actual site, The Hype Machine. ;)Downloaded the PDF to read on lunch. Look forward to reading it!

Ah yes, I can see how one would think that, Al. However that particular Hype Machine is safe from my scrutiny, except that it falls into the general category of hype machine.

The article is short, so it shouldn't cut too far into your lunch!

Great article, Barb. As you know, I do album reviews on my heavy metal site (though not enough, lately...I'm so behind), and in a lot of cases Google searches for the album reviewed often bring people to the site, which means there is interest in the album to begin with. I have no idea if it helps the band at all (or if it's a negative review, if it hurts the band) but I'd like to think that the publicity the band gets can only be good.

It's interesting that the reputation of the reviewer is so important. It makes sense. But I guess in my mind, if there are random bloggers out there who just do reviews for the fun of it, their opinions are just as valid - depending on the QUALITY of the review. I know a metal reviewer with a blog who does fabulous reviews - one of the best reviewers I've ever read, actually - and I know I'd discovered a lot of great bands through him. So, I think it can work both ways.

Interesting piece, Barb. I've tweeted it too. Come over to the dark side...muhaha! ;)

Thanks for your thought provoking observations, WC. I have to agree that, regardless of how well known the reviewer is, it's the quality of their reviews that should determine how much faith you can put in their words. And I guess those quality reviewers do get a certain level of reputation, much as the metal reviewer that you spoke of now enjoys, among some circles anyway.
I know some people have expressed thanks for bringing a particular band to their attention, and I imagine it can only benefit the band as well.

Oooh, thank you, Al! You know that I am Twitter-Curious, so this may just be the impetus I need to draw me over the The Twitterside.

Very interesting article Barbara... I have to admit my musical criticism seldom ventures into negative territory largely because I would rather tell people about the good things that are out there. It seems to suit my personality better too... That being said, I am doing less of that; preferring instead fuller analysis of recordings. Time is just too limited I guess. The thought of Listening Clubs then absolutely enthralls me. To listen and discuss music with likeminded persons... Pure heaven for me. Olenka's comment about focusing on the art really resounded with me to that end.

But I digress... Are music critics making or breaking artists? No. Good artists are breaking artists. The best stuff always rises to the top. I like to think we're just speeding up the rise a little.

@ Sean: case in point, I just purchased the new Decemberists thanks to Barb's gift of some of their CDs in Oct. So! Word of mouth baby!

Barb, I also know that Charlie purchased Olenka's CD after reading your stories about their stay at your place.

Man, people should just listen to Barb! She can hand sell CDs without even trying!

You make a valid point about steering away from negative criticism, Sean. I do believe that it has a place in music criticism, but I'm not sure if it's necessarily my place to provide it. Partly this is because of my mission statement to promote emerging musicians. I think it's my job to focus on the aspects of an album that I think are successful, that I do enjoy, in order to attract listeners who can then decide for themselves.
That said, a Listening Club, where all criticism is amongst friends sub rosa, is a wonderful place to really dig into the bones. Something that excites me as well.
So true, though, about the cream rising to the top.

You are too kind, WC! But I am touched that people either have trust in my impressions or are willing to take a chance on an unknown musician. And of course, it works in many directions. I would never have guessed, if not for your introduction, that I could love metal.