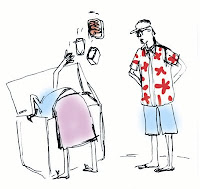 I have an uneasy relationship with my deep freezer. It's great for filling up with batches of planned leftovers - lasagna, chili, soups, but should a hunk of raw meat find its way into the depths, it is gone. I will not see it again for at least three years, at which point I will toss its freezer-burned carcass into the garbage.
So when the Spousal Unit brought home five massive frozen Hutterite chickens last year that someone at his office was selling for his kid's school fundraiser, I knew I was doomed. It's one thing to throw out a package of pork chops, another thing entirely to huck five chickens, each the size of a small turkey.
I knew I had to break with tradition, and make a concerted effort to cook these behemoths. I roasted the first one, which was a big mistake. This bird was not brought up to be a roaster; I think it used to pull the tractor on the colony or something, judging by how stringy and tough it was.
Over the next few months the remainder were boiled and turned into soups and chicken pot pie. I am pleased to announce that today I turned the final dinosaur bird into 250,000 pot pies, which are now in the freezer. Okay it was actually nine pies, but I am pretty pleased about the whole thing. I have been strutting around like Martha Stewart right after the ankle bracelet came off. Plus there's some chicken left over which can be turned into burritos or something.
I should not have cook for the next two years.
What's in your freezer?
Posted by Barbara Bruederlin at 7:18 pm

Email ThisBlogThis!Share to TwitterShare to FacebookShare to Pinterest
Labels: embracing my inner hausfrau, where meat goes to die

We don't have a deep freezer, but I do love chicken pot pie.

Nothing like a little pot pie to get you through the winter, Mr Anchovy.

Rats, to feed our snakes.

When I moved, I was amazed at what I found cleaning out the freezer. Basically, it's where bread goes to die. I have made a good effort at the new place to try and keep it tidy though. Basically there is lots of fish, and frozen soup. And chocolate. Out of the way, to be used in case of emergency.

Well done on the baking!

We have two freezers, one being the outside. Right now there's moose meat and codfish in the 2nd, a present from my folks who visited from Newfoundland this past Christmas.

I love pre-making meals and putting them into the freezer - it is like getting the night off from cooking supper when I am too tired to even think.
We are almost out of meals but I am hoping to make a huge batch of many lasagnas this weekend for us and that cheeky oldest daughter of ours.

We have a deep freezer but only Mom uses it (she buys meat in bulk). Like Mr. Anchovy, I loves me some chicken pot pie though. How quickly can you ship one of those puppies up north?

Someday I am going to make a dinner made of nothing but chicken asses, Dr M.

Cool, Missy! Do you make sure that you show your dinner guests, just to keep them on their toes?

Is that where the last of the Newfoundland cod fish is, John? Do you have to plug in the outdoor freezer? So many questions...

I find that one lasagna is enough for many freezer meals, Kathy, but then there are only two of us now, and one of them is not your husband.

I'll stick a stamp on one of them right now, Karen. Wait, postage has gone up again? Forget it. Does your mom actually use that bulk meat? I admire people who remember to do that.

Ha! I don't know what's in the bottom half of our freezer. I tend to only take out whatever's sitting on the top.

I'm sort of still reeling from the fact that children sell chickens (or meat at all) as a fundraiser. We sell cookies here. And more useless matter.

I am weird. I use everything that's in the freezer within weeks or so of it being there.

I'm with you on that, Susan, as I have no interest in practically climbing into the freezer in order to find a freezer-burned roast.

They seem to sell everything here, Lesley, cookies, pizza, popcorn, meat, their souls...
I think you win the optimal freezer usage award! And if it does not exist, we'll make one.

Awesome! As you know, I just did an epic cabbage roll project which is taking up quite a bit of space in my freezer, and then I did a big lasagna...I made cookies, bread...I'm set for a just a little while, I think!

I think that someplace that has access to your freezer would be an ideal place to spend the winter, WC.

you mean who is in the freezer along with prawns, halibut, salmon, tuna and various cuts of meat.