flap your wrists in the air 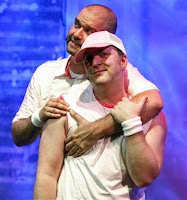 BASH'd: a gay rap opera
High Performance Rodeo
At just over an hour in length, BASH'd is a relentlessly energetic musical tirade against homophobia. Introduced by the angels Feminem and T-Bag, sporting feather-shedding wings and pink hats, BASH'd celebrates the tragic love story of Dylan and Jack.
In verse. In hip-hop verse.
Sassy, irreverent, hilarious, and touching, BASH'd features such memorable characters as Dylan's homophobic father and lovingly addled mother, Jack's advice-spewing dads, and all the stereotypes of the queer world who populate the gay bar where the two star-crossed lovers first meet.
Chris Craddock and Nathan Cuckow, the creators and actors, have created a world in which homosexuality is seen as both the norm and an abomination. It's a world that is filled with misunderstanding and acceptance, with tenderness and rage.
With the only props being two pink-cushioned stools (which are rarely even used), the staging is furiously paced and sweaty. Since we were seated in the front row, we got to shake Dylan's hand after the wedding, so we can attest first-hand (pun only partially intended) to the sweat factor in the production. Many of the scenes take on a filmatic sensibility, with flash-backs, stop-motion, and slo-mo techniques, techniques which add another layer of theatricality and further blurs the line among genres. You know, just in case a gay rap opera isn't genre-blurring enough.
BASH'd is a rousing, moving and gloriously over-the-top experience. You should go.
BASH'd
High Performance Rodeo
Posted by Barbara Bruederlin at 8:59 am

You had me at "gay rap opera
High Performance Rodeo."

You captured it perfectly! I wish everyone would see this show.

It says it all, Beckeye. I actually think you would have loved this. They took it to NYC last year, did you see it?

I wish they would too, Susan. Dylan and Jack have so much to teach us. About dancing.

I saw an ad for this in the program of the play I went to on Thursday. Fancy that!

I'll have to check and see when it's coming here, I can't recall.

I think you'd enjoy this, Al! I love the series of coincidences between our lives lately too (except for the part where you score Pixies tickets and I don't).