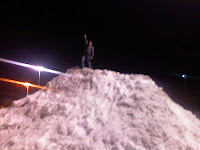 It's started, the annual filling up of the parking lots.
Due to a glitch in the organizational machine, I failed to get the winter rugs laundered until yesterday. And I paid for that oversight, having to park at the opposite end of the parking lot, and then having to schlep five giant rugs across the icy ruts. Thanks to my finely tuned muscular body, though, I made it back to the urban assault vehicle without dropping any carpets in the snowbank. But then I couldn't leave because there was a linen delivery vehicle (the irony was not lost on me) double-parked behind me, blocking me in.
I couldn't get annoyed though, because it was obvious that the poor delivery guy was having a far worse day than me. The door to the dental office, to which he was attempting delivery, was inexplicably locked, so he had to schlep his linen all the way back to his truck. There was a lot of schlepping of cotton happening today.
But glory be, I returned home to discover a City of Calgary snow plough making a pass down my street. This is only the second time I have ever seen a snow plough on my street in the thirteen years that we have lived here. Mayor Nenshi continues to make good on his election promises. And I continue to believe we elected the right person to run this city.
And finally, Shaw Cable has announced that they are going to start charging $1.00 for people to watch the fireplace channel. The money will go to charity. I don't generally watch the fireplace channel, as we do have a fireplace of our own, but I am one of the 39,305 fans of the Guy Who Pokes the Fire on the Fireplace Channel facebook page.
What's happening in your town?
Posted by Barbara Bruederlin at 3:46 pm

Email ThisBlogThis!Share to TwitterShare to FacebookShare to Pinterest
Labels: a Calgary day, we have an awesome mayor

Is the fireplace channel on year round, or just during the holidays? I don't have cable regardless, but I'm curious.

I was slightly annoyed at the traffic down my street on the way home from work this week, but in the centre of town they were putting up holiday lights and the fog had lifted and all the lights against the backdrop of the mountains (in the far distance) was too beautiful to stay annoyed for long. It's also 6 degrees today. Huzzah!!

winter rugs? what are those?
You've only ever seen a plow twice. wow. When we get snow which s not all that often, I'll get a plow several times, sometimes several times a day. Even though I'm on a relatively quiet street, it is considered a feeder and the plows use it to get to other areas so they plow as they go. And the the next day the snow melts

I think it's seasonal, Al, but to tell you the truth, I have never checked.
Your town sounds positively magical right now! My neighbourhood is all lit up so beautifully, except for our place because I missed getting Norman the reindeer up before the big snowfall. Ah well, next year.

Winter rugs are the big heavy rugs and runners for in front of the doors, so you have a place to take off your boots, Kelly. It's what we do in places where it snows.
You must have a huge snow removal budget. We have always traditionally relied upon chinooks.

Next time you see the linen delivery guy's van, tuck a note under his windshield:

Dear Linen Delivery Guy:
Thank you for double-parking and blocking me in, back in early December. It gave me a few minutes' pleasure watching you getting locked out of the dentist's office and provided a good blogging muse. Happy Holidays!

I suppose this would be a bad time for me to say that I'd really like some snow here? It's just, if it's going to be cold, snow just makes sense.

And a fireplace channel? Well that would be odd if it weren't so cute!

I cannot believe that in a place like Calgary you don't have better snow removal. I hope Nenshi keeps it up.

What's happening here? Huge dumps of snow...epic icicles (more), and this morning there is actually sunshine!

no we don't have a huge snow removal budget. It's just if we get a snow...they plow. Generally we get one snow a year so we might have a couple days of plowing. Most of the streets don't get plowed, just the main ones and the feeders into those.

Victoria's annual Light Truck Parade was tonight and I am so lucky because I get to watch the spectacle drive right past my living room window. Love that parade. I also got to see the sail boats and yachts all lit up for the sail past. One sail boat had Rudolph throwing a life preserver out to a drowning Santa. They even had a looped recording of a mayday call asking for assistance to come save Santa. Certainly made me smile.

With my luck, I'd get the wrong delivery truck, Volly; they all look the same to me. And to be honest, it didn't really bother me, as I wasn't in a hurry.

Sometimes the cold feels colder when there is no snow, so I understand what you're saying, Lesley.
The fireplace channel has been running since 1986 apparently!

Those were epically epic icicles, WC! Is that normal for your area?

Well that makes sense, Kelly. I guess one can afford to plow after each snowfall if it only happens once a year.

That sounds wonderful, Toccata! If a trifle weird. Props to the originator of the drowning Santa idea. I guess it's a very real worry when Santa comes to the island.

We often get epic icicles. Those ones I posted the other day are gone now, but there are lots more forming right now.

Before this year I thought the only thing this city owned was a pickup with a shovel tied onto the front bumper.

I don't have any "winter rugs". It must me a Winterpegger thing.

off to join fireplace arm fanclub....

No icicle shortages in your hood, WC.

Maybe I have messier people coming in and out of my doors than you do, UB. Or perhaps you just clean the house more often.