forehead resting on a record shelf

I make the same sad excuse every year. Too much fine new music released to properly listen to it all, much less pass judgment on it. And I missed out on some big ones this year too - Beach House, LCD Soundsystem, Sufjan Stevens, Owen Pallett, M.I.A., Caribou, Jonsi, Holy Fuck, Wintersleep, Black Mountain. Shameful, really, the level of my neglect.
There is time to discuss my failings later. For now, I would like to celebrate those albums that I can embrace as thoroughly as they embraced me, those albums that engaged my brain and my senses, those albums that logged a lot of serious rotation on the record player, those albums that ultimately won my heart.
In years past I have declared the top 7 of 07, top 8 of 08, top 9 of 09, but 2010, I think, needs a departure from the usual pattern. Instead, I've chosen my favourite album of the year, followed by the next three, and the next three and the next three, etc. But within those groups of three, the albums are not ranked; rather they are alphabetized. Because I am feeling my Libran indecisiveness tendencies particularly strongly during these dying days of the year.
Bad Tempered Zombie's Favourite Baker's Dozen of 2010: Albums
Frightened Rabbit - Winter of Mixed Drinks 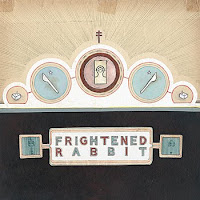 From the first blast of muddy guitar heralding in the heartbroken yelp of the thick Scotch brogue right through to the final hope-filled anthemic chorus, this album is filled with such foot-stompy, hand-clappy military tattoo drummy goodness that it never fails to fill me with joy. The themes may range from hopelessness to redemption, angst to ascension, but within the introspection Winter of Mixed Drinks is ultimately uplifting.

I have never once regretted putting this CD into the player. There is no tiring of this album.

the next three:
Arcade Fire - the Suburbs
- proving yet again that Arcade Fire cannot produce a bad album. Rock solid.
Eels - End Times
- absolutely beautiful melancholy. The end of the world never sounded so good.
the National - High Violet
- a highly satisfying album that lives superbly up to the high expectations of its release.
the next next three:
the Extra Lens - Undercard
- intelligent subversive lyrics through John Darnielle's iconic voice
the Lightning Bug Situation - Call
- heart-stopping sensitivity and late night introspection
Olenka and the Autumn Lovers - And Now We Sing
- a voice that grabs you, solid songwriting, making this a breakthrough album

the next next next three:
Handsome Dan and His Gallimaufry - Provincial Parks and Breaking Hearts
- indie sensibility meets vintage Canadiana in a gorgeous EP
Josh Ritter - So Runs the World Away
- thoughtful maturity from one of the world's best songwriters
Little Scream - the Golden Record
- a wonderfully ethereal voice melding with strangely beautiful experimentation

I would love to know what music you loved this year. What's on your best of list?
Posted by Barbara Bruederlin at 4:00 pm

Email ThisBlogThis!Share to TwitterShare to FacebookShare to Pinterest
Labels: albums of the year, the Zombie awards

I have to think about this, but there was some great stuff released in my world for sure. Alas, no Nightwish, though; they should have something out by this time next year, however, and it had better be worth the wait.

There's nothing more sweetly frustrating than waiting for the new album to drop, WC. Radiohead's should be coming out next year as well!

Of all the albums in your neglected-to-listen pile, you should really go get Jonsi's album and listen to it. Really. Like now.

I like this new ranking system, and I thoroughly agree with your choice for best album. That Frightened Rabbit album is flat-out one of the most gorgeous things I have ever heard.

My own list will be up sometime soon so come over and have a look, yes?

I fully intend to check out the Jonsi album properly, BAP. I've loved the bits that I have heard.
I could listen to Winter of Mixed Drinks on endless repeat for weeks at a time. In fact, I think I have!
Coming over to peruse your list!

I'm going to grab my bonnet and run out to find Frightened Rabbit. Sounds just the tonic.

You mean music released this year?...um, ah, well let's see...this year I mined for a lot of old obscure accordion music....and I got to see Ramblin' Jack Elliott....and the Ukelele Orchestra of Great Britain too. I heard lots of great music over here in Zombie-land that I would never ever find on my own. And I also discovered a blog called Planet Barberella (http://planetbarberella.blogspot.com/), a treasure trove for the lover of old jazz and swing and western swing and all kinds of other stuff that's right up my alley.

I really have to check out these Frightened Rabbit guys...

As usual, I am shameful compared to you. But, a couple favorites of mine this year were the new records released by the Zac Brown Band, and by The Roots (both of whom I pride myself on knowing of before the mass population). :)

Happy Christmas to you and yours!

Great list! I just posted part 1 of mine. We have a lot of similar albums, totally in agreement with you on FR. That album went into my car stereo and never came out. Love that. Bring on 2011!

Even if it means elbowing your way through the Christmas crowds, that will be a purchase you will never regret, Phlegmmy. Unless of course it results in Christmas crowd injuries.

The Ukulele Orchestra of Great Britain? That sounds absolutely magical to me, Mr Anchovy.
I have heard and learned of so much music from your site that I would not normally be privy to. Hurray for the internetz.

I suspect you would like them, WC. Very rousing music.

Nice diversity in your musical taste, Lesley. I applaud that! You've got me beat, as I have not listened to either group. I have my work cut out for me.

You wasted no time posting that, in the wake of onerous travels, Al! I shall come right over to inspect and admire your list. I would never have heard the Extra Lens album had you not introduced me.

I hope you had a great Christmas!

It was lovely, John. I hope yours was as well!

So glad you approve, craftymodster! Because you have some fine fine taste in music, gurhl!