scratch that last one 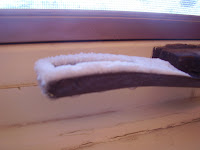 I should have known that -42C is not really all that unusual for a December night in Manitoba.
Because I just found that button. And yeah, it said -49C.
My apologies to Hitchhikers' fans. Synchronicity has not been achieved after all.
I wouldn't be surprised if I was wrong about my highest ambient temperature either. I do clearly recall that the humidex was 52C that day, though. I remember thinking that attempting to breathe at 52C is akin to breathing through pudding.
Still, it's probably best to disregard anything you ever read on this blog.
Posted by Barbara Bruederlin at 5:21 pm

Email ThisBlogThis!Share to TwitterShare to FacebookShare to Pinterest
Labels: bragging about the weather, my memory is not what it never used to be

I stopped turning greyer years ago thanks to the bossiness of my hairdresser, Kelly.

Oh, what's a measly 7 degrees at that stage of the game?

I sealed my back door in with plastic yesterday. Looks very attractive. It's also accumulating frost like my freezer.

I should sign up at Sugar Daddy.com to see if I can find myself a ticket out of here.

I haven't liked this -7 all that much. Hitting Winterpeg in December is already making my old bones cold.

It'll give Juno hours of entertainment, playing with the frost, WC. Tell her to keep her claws retracted.

You can spend Christmas glaring accusingly at whoever came up with the idea, Toccata. Provided it wasn't you, of course.