don't judge an album by the first 50 seconds 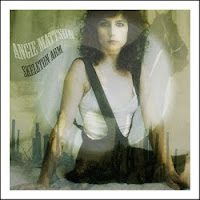 Skeleton Arm - Angie Mattson
Maybe it was the big-haired rocker chick photo gracing the cover of Skeleton Arm, conjuring up flashbacks of Alannah Myles, which caused me to prejudge. I turned off this album before the first minute was done, dismissing it as too Black Velvet. Had I left it at that, I would not only have made a grievous error, but I would have done Angie Mattson a considerable disservice.
Skeleton Arm is filled with muddy guitars, a sultry backbeat, and a dark atmospheric strut. Vocally, Angie Mattson begs comparisons to Lucinda Williams or Aimee Mann, delivering languid steaminess with just the suggestion of a sneer. There's a touch of David Lynch in the cinematic sensibilities of these songs. The darkly voluptuous groove that defines this album conjures up images of creaking houseboats and illicit encounters in seaside joints. There's a drawling sensuality in both Angie Mattson's delivery and in the big fleshy guitar riffs that populate the background.
This album may not be the best choice for a road trip, and it's doubtful that any of the tracks would ever make it onto any workout playlists, but Skeleton Arm does deliver a moody and slightly ominous lushness. This is music that celebrates its darkness.
Angie Mattson website
Posted by Barbara Bruederlin at 12:28 pm

I just visited her site and read her bio. She sounds very intriguing. I'll have to check her out.

Good for you, pushing past that initial prejudice! I took one look and thought Danger, danger, '90s hair and faux-rocker glare...

I'm listening to her singing Thank You as I write this. I don't find her voice as rich as Lucinda Williams but I like it. The more I hear the more I like.

Hey, under their people who like this like they have Hem. I adore Hem. I love Hem. Do you know Hem? Oh, Barbara you have to get some Hem in your life!!!

p.s. Ok, Now I'm listening to Cool Water. That makes me want quit under 50 seconds! I'm persevering but not happily! Ok, I'm done! That song sent spasms up my spine.

Hmm, well I might try it if you say it's OK. But I may have to wait until the newly awakened bad memories of seeing Alannah Myles live go away.

I was intrigued by her Fisheries Management degree, WC.

It's a retro look, no question, SME, and it does colour one's impressions.

I've always been fascinated by the very visceral reaction you have to music, Toccata. Remember when I first introduced you to Radiohead? I thought I had killed you!
I've only heard a tiny bit of Hem, I will need to seek them out. Definitely.

You are a true survivor, Beckeye.

I try not to succumb to the syndrome, Mr Anchovy, but I am not infallible.

OK, giving this a go right now. Listening to "Cool Waters." Sultry. I like that about it. She has a very sexy voice. Not exactly my cup of tea, however.

Now: "Make This Real." I like this a lot better.

I see how you got all your descriptors for the review, though, and I definitely sense a lot of what you're saying about the style and the compositional elements. I can totally imagine this music being played at a muggy summer beach party or for "illicit encounters in seaside joints."

You gave it an honest listen, WC, and that is good enough for me.