bunny break is over 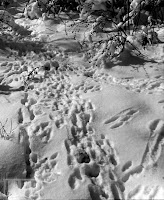 There are two or three giant jack rabbits that live on our street. They've been around for years. Well, to be honest, I'm not sure if it's the same rabbits that come back year after year, but they sure act like they own the place. When drivers have to stop their vehicles because there's a jackrabbit in the middle of the road, glaring at them and daring them just try to run me over bitch, then you know those rabbits feel pretty secure in their social status.
I will often get up in the morning to find a couple of rabbits sleeping in the yard and in the summer I am constantly sweeping turds off the sidewalk.
But during the almost two week cold snap that we had recently, those rabbits were nowhere to be found. And since the Slightly Retarded Kitty was also not interested in venturing outdoors, the thick layer of snow that had descended upon the yard was absolutely unmarked, virginal, pure as .. well, as the driven snow.
Now that the temperature has returned to more seasonal values, there are rabbit tracks all over the yard. I think they've been having a barn dance, to celebrate their return home.
Posted by Barbara Bruederlin at 7:20 pm

teh puppehs are quite mad for want of a bunny. They go into paroxysms at the merest whisper of bunny paws scampering through the dry leaves in the yard. There may one day be a bunny reckoning and a fresh hide for the shed wall. Let's hope the hide is bunny fur and not puppeh-- they kick like little mules.

I remember those rabbits - they were huge! There must be something in the water in Calgary, I tell you.

I wonder if your jack rabbits would like some playmates. Victoria is always on the lookout for some place new to send their bunnies.

Okay, while the bunnies are a nuisance and eat all our flowers in the spring and summer and drive the dogs (and probably cats) insane, are bunny tracks not the cutest thing?!

They are indeed seasoned kickers, Phlegmy! Our previous cat, the killer of all things that breathed, always gave the jackrabbits a very wide berth. Tell the puppies to exercise caution.

I suspect it's all the good clean living we do out here under the wide open skies, Al.

Playmate bunnies, Toccata? Where have I heard that concept before?
Perhaps we could exchange some of our coyotes for a few of your bunnies? Problem solved.

They are quite striking, Lesley. Very distinctive shape and, in particular, size.

Of course they are having a barn dance! They have been secretly practicing to all those lively Calgary Folk Fesitval tunes you brought back. Thx for the CDs. The Roberta Flack song was an interesting change-up on book one. Haven't listened to two yet.

I was thinking of starting a marbles tournament for the kids in the neighbourhood with those turds, WC.

I'm glad you got the CDs, Leazwell, and that you enjoyed them. I may just have to loan a copy to those jackrabbits, for the next barn dance.