another Canadian band you should know: Handsome Dan and his Gallimaufry 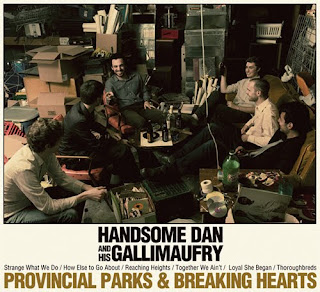 Provincial Parks & Breaking Hearts
- Handsome Dan and his Gallimaufry
Akin to closing up the cottage on the last weekend of September, the ghosts of summer evenings already haunting the waters lapping the rocks, campfire embers rapidly cooling under the first fallen leaves, listening to Provincial Parks & Breaking Hearts fills you with nostalgia for something not yet fully passed.
It's a very Canadian album, this achingly lovely offering from London, Ontario's Handsome Dan and his Gallimaufry, a Canada torn from the pages of a grade six history primer, a Canada of boat houses and wood-sided station wagons, of summer trysts and racetrack dust. It would not be unexpected to find a Labatt's stubby in the hands of the assorted gallimaufry pictured on the album cover, and yet you will not even spot so much as a plaid shirt.
Handsome Dan and his Gallimaufry are very solidly part of the exploding Canadian indie music scene ; the band belongs to the Open House Arts Collective with most of the membership also playing in other independent bands. Yet despite the band's undeniable placement at the forefront of Canadian sound, the gorgeously lyrical snippets of folkie Canadiana that populate this EP are more reminiscent of an era in Canadian musical history that predates the indie explosion by decades.
In part this is due to a quality within frontman Dan Mancini's voice, a lilting easy-going quality that, as was realized by an ear far more astute than mine, is reminiscent of the vocals of one of the forbears of modern Canadian music, Gordon Lightfoot. In no way does this make the songs on Provincial Parks & Breaking Hearts at all derivative, but it does impart upon them a distinctly nostalgic appeal, a warm groove of instant familiarity. An instant familiarity which holds just enough back that subsequent listens inevitably peel back more layers of discovery, yielding more depth and more fullness of sound each time you spin the platter.
Melodically lovely, lyrically rather more subversive, the six songs on this altogether too brief an album are an utterly fulfilling mix of strumming and crying guitars interspersed with anthemic bursts of drums and power chords, of lilting lone voice and male campfire choruses.
Suitably, an old-school Ontario coat of arms graces the album, while the very anthemic track, Loyal She Began, gleans its name from the provincial motto loyal she began, loyal she remains. It's a very fitting nod to a place and a time from which we sprang, a solid indication of where we are heading. Capably straddling the boundary between vintage Canadiana and ground-breaking Canadian indie, Provincial Parks & Breaking Hearts marries the two solitudes of musical sensibilities with such grace and heartwarming beauty that it's painful when the album stops spinning.

So you just play it again.
Handsome Dan and his Gallimaufry
Posted by Barbara Bruederlin at 2:43 pm

Excellent, excellent review my friend. I could almost smell the pine paneling at the cottage as I read this.

Thanks so much for your thoughtful words. These are some talented young men and their music needs to be heard.

I heartily agree, Sean, everybody needs to hear the music of Handsome Dan and his Gallimaufry. So glad you were transported to cottage country in the process. No need to hang the pine air freshener from the rear view mirror, then?

I do not know this group but your review makes me want to look them up. It's that second last paragraph that would make me buy their album unheard. That and the line, "A Canada torn from the pages of a grade six history primer."

Never under estimate the power of a review. That's how I discovered Neko Case. I read a review in the Globe and Mail that made me think, I absolutely have to own this CD and I left Starbuck's and didn't arrive home until I owned Fox Confessor. By the end of the weekend I owned everything she and the New Pornographers had put out that I could lay my hands on! Looks like tomorrow I'm going shopping.

Reviews can be pretty persuasive, no question, Toccata. The key is in looking past the hyperbole to determine if the album is one that you want. Obviously you are very skilled at this!
Believe the hyperbole on this review though, it's all true. Let me know if you have any trouble locating the album and I'll help you out.