getting away with it 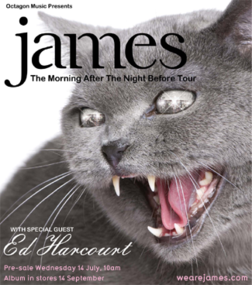 James
Commodore Ballroom, Oct 7/10
Now I wish I had bought this tee shirt, except that I am a little past the vintage where one can safely wear a band shirt without raising judgmental eyebrows. But what I wish even more was that they had their new album for sale last night. They played quite a few new songs and they proved to be a perfect blend of that characteristic James sound and something fresh.
I can say unequivocally that last night's James concert was the best concert experience I have had since humans became bipedal. Part of that was due to the venue, of course. The Commodore Ballroom is one classy and spectacular venue, and we managed to snag a perfect table, on the raised level, very close to the front, with an absolutely unimpeded view of the stage. This has never before happened in the history of humanity.
Opener Ed Harcourt did a lovely set. A very striking figure he was, in a stylish black evening coat, performing primarily on the keyboards, with bass and drum backing him. It was a rather intimate set that he performed - nice, but a considerable departure from sweepingly dramatic performance of the headliner to come.
I rather expected to see James perform an unplugged Muzak version of their catalogue, but nothing could have been further from the truth. They were absolutely perfect. A big sweeping sound, complete with trumpet and drama and yes, even the famous Tim Booth dance.
Tim Booth, by the way, is aging incredibly well. With his shaved head and mustache, he is rather reminiscent of Edward Norton circa American History X. Or, as the Offspring so astutely observed, the outfit says yoga instructor, but the mustache says leather bar. Booth has such charisma that when he began to walk among the crowd, leading us in song, the messianic comparisons were undeniable. In a good way, of course.
The Offspring, who was down on the dance floor, shook his hand when he was doing his walkabout amongst the people (thereby missing out on a photo op), and I was too busy standing there with a big shit-eating grin on my face when he came singing by our table to even think about the camera that I left behind in the hotel room.
It was an amazingly high-octane, lots of love, feel-good evening, and even if you had never heard James before, you would have been completely swept up in the solid musicianship and the vibe of communion. We danced, we sang, we clapped till our hands were raw.
The gentlemen of James proved unequivocally that they still have it in spades, and they aren't afraid to let the world know.
Posted by Barbara Bruederlin at 8:26 am

I'm so glad the concert was great, and that you got a great seat too! That's the thing about the Commodore; if you get a good seat it's fab, if you don't the experience isn't the same. I'm sad I missed it.

I'll have to go pull out my James records now. :)

It was the perfect storm, Al, a perfect comfortable yet rocking venue with a perfect iconic and still relevant Brit pop band. Everybody wins!

I should have bought that shirt, WC, it was so cool! Kicking myself now.